A Fowl Report – “Now That’s a Piece of Chicken”

If you were living in a cave on the top of a mountain you might have missed the dust up late this past summer when fast food restaurant Popeye’s Louisiana Kitchen busted into the chicken sandwich market with their new sandwich offering. It made competitors who have a chicken sandwich tremble and caused those chains who didn’t have a viable alternative to ask “why not?”

The demand for the sandwich quickly outpaced supply and coverage of the shortages caused even more free exposure for the new offering. Planned or not and in spite of huge sales, Popeye’s pulled the sandwich from its offerings claiming – they ran out. Only recently (early November) did they bring  the sandwich back with surprisingly little fanfare, go figure.

So I’m sure some of you had the chance to stand in line to get a chicken sandwich several months ago and have already made your judgement. If not, your hungry writer finally was able to complete a taste testing of four of the best known chicken sandwiches with some surprising results.

My tasting report takes us from the least to the best. Each listing starts with the vendor’s description of their chicken sandwich. 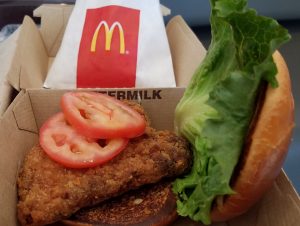 “Buttermilk crispy chicken sandwich made with all white meat chicken fillet and no added colors. Layered with crisp leaf lettuce, tasty tomato and mayonnaise, all on our delectable artisan roll”.

The sandwich featured a decent brioche bun that stood up to holding and biting, but too much mayo made the sandwich slide around and unpleasant to eat. As to “no added colors”, our sandwich featured a smaller piece of chicken that was rather dark in color, a fact found in other reviews. This may have been a result of being over fried or having been fried in the same oil as something else spicy – either a mistake or a lack of caring. The chicken also had a fairly strong peppery spice that lingered and not in a good way.

Not an average sandwich but would probably “…not order again” says a tasting panel member. 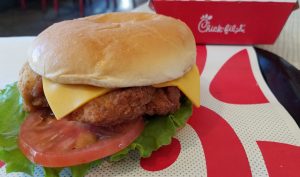 “A boneless breast of chicken seasoned to perfection, hand-breaded, pressure cooked in 100% refined peanut oil and served on a toasted, buttered bun with dill pickle chips, Green Leaf lettuce, tomato and American cheese”. Ordered crispy chicken but had to get a “deluxe” to include lettuce and tomato

It’s the middle of the lunch hour so chicken was served very hot and quickly. The chicken had solid flavor but could needed some salt and not sure about the American cheese? The bun was fairly simple, rather squishy and adds nothing to the sandwich. It was a nice piece of chicken (I’m a big fan of their chicken strips) and the sandwich was good but not great even though we wanted it to be. There was no mayo or other sauce on the sandwich as you had the opportunity to add your own. Disappointed. 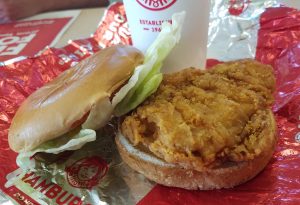 a flavorful first bite with tasty breading.” So says the tasting panel.

The panel was really surprised and unexpectedly impressed with the sandwich but we wished pickles had been included as we did not happen to ask for them.

Despite the published comments of others this would have been our winner in a three sandwich race even though we wouldn’t seek any of them out on a regular basis. 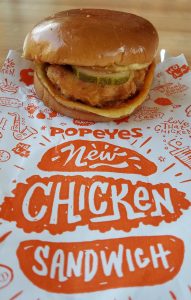 “Crispy chicken marinated with onion, garlic, red and black peppers and served on an artisan bun with lettuce, tomatoes and a creamy mayo’.

“That’s a piece of chicken!” said a surprised tasting panel member. The truly Brioche bun holds a big, thick well-cooked solid piece of chicken with two big slices of pickle so you get pickle in every bite. Tasty breading/crust helps make it the best chicken sandwich I‘ve ever tasted. Winner Hands down and great value for $4.

Popeye’s classic chicken sandwich was clearly better than its competitors in every way. The chicken was incomparably flavorful, crispy, juicy, and fresh and all the elements of the sandwich were well balanced. Its price tag is also the most appealing at $4, so it wins best sandwich at the lowest price – you should really try one of these!

The elusive young drinker continues to be of interest to the wine industry.

My recipe for a Thanksgiving flavored turkey burger with cranberry mayo receiving rave reviews, is elsewhere on the site, enjoy!