← News of the Crush, Costco Liquor, Big Mac Sliders and Lagunitas Layoffs
So a Blaze Designer Decides to Make a Meatloaf →

And the Winner is…

Actually loyal readers I have two winners to report on in what is a unique situation for this edition of the Whine. You hopefully will recall that the last addition of Woody’s Whine was a tasting panel review of the top three national burger chains resulting from my desire to revisit McDonald’s after their addition of fresh beef to the quarter pounder; it was an easy win for Mickey D’s.

Of course due to my now left coast affiliation I had to include the famous In-N-Out burger that in fact was the real winner. I also suggested that another chain Habit Burger, a knock off of In-and-Out was about to open in town and that your trusty taster would follow up and I did.

Here’s where it gets interesting, my lovely and attractive editor at the Forest Park Post, where the Whine originated some ten years ago was so inspired by my burger column that she in fact decided to hold a contest for readers of the paper to select the best burger in Forest Park. I was thrilled to find out that my writings were  her muse.

So while we lived nearby for 30 years and have eaten at the burger winners and other terrific places in Forest Park (try Jimmy’s on Madison for family style Italian food) just to be clear I have not reviewed these burgers for the Whine only interviewed the respective owners. And while a best burger contest in Forest Park IL may or may not be of interest to you, please find my In-N-Out vs. Habit Burger results first along with some harvest info and a touch of Rose’.

I’ve also posted two recipes, one I made only last night. The bacon jam recipe is out of this world and great burgers, turkey sandwiches as well as a bacon, egg and cheese English muffin breakfast sandwich. Both of the lead chef’s I catered with the last two weekends were impressed with the jam. The pasta recipe is an interesting combination of oil-packed tuna, arugula, garlic, capers and anchovies, that actually creates a sauce for the pasta with none of the flavors being prominent, enjoy.

So without further ado I offer you the results of two best’s – so to speak. 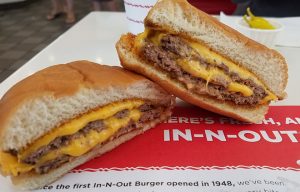 Well very quickly there is no contest here, while the Habit burger looks like a direct knockoff of In-N-Out, reverse build and all, looks are deceiving. The buns are grilled on a flattop grill and for some reason only the edges crisp up while the center of the bun is doughy and dry and has no flavor. A plain single with cheese was boring with the cheese adding no flavor and even with the lettuce and tomato option there just wasn’t much good going on in the sandwich, it will not be a, wait for it…Habit for us.

“Quality you can taste” is on the side of the building at In-N-Out (about three blocks up the street from Habit) and they’re not kidding. Even the simple cheeseburger has, according to a tasting panel member, “a ton of flavor”. Great bun, great beef and cheese; it’s the best tasting cheeseburger I’ve ever had for $3.85.

The 2018 grape harvest has started in Napa and Sonoma

The harvest began the week of August 20 at night while the grapes are cool. Crews first pick pinot noir and chardonnay grapes for sparkling wine because they are at a lower sugar level needed for fermentation of the bubbly. It’s been an uneventful growing season with a mild winter, timely spring rains and summer heat without any wild temperature swings. By the time you read this the grapes will have been pressed into juice that is chilling in stainless steel tanks and will go into sparkling wine that will be available to you in 2021. The crush will likely run through the end of October, when the last of the red varietals such as cabernet sauvignon and merlot are picked. We’ll talk then.

It’s rather apparent that Rosé is off the hook this summer which is a good thing, it’s been a secret, go to wine of mine for quite some time and is great with a lot of food, spicy as well as rich.  Problem is there’s a lot of weak, cheap crap out there made from poor bulk wine served too cold so you can’t taste anything.

Color is not a real indicator of quality only of the grape type that the juice is pressed from. The best wines tend to show a complex range of fruit characters (strawberry, cherry, peach and floral notes), Fruit intensity rather than neutrality is also important.

Here’s three to try from Jeff at Famous:

2017 Corte Fiore Rosé – Made from Montepuliana grapes from Abruzzo, it has refreshing, crisp acidity with notes of juicy cherries and wildflowers $12.99

Best Burger in Forest Park as voted by readers

Old School Tavern and Grill on DesPlaines was the top vote getter in the Forest Park Post’s Best Burger In Forest Park! contest beating out Goldy’s by a mere 20 votes with O’Sullivan’s Public House claiming third-place. 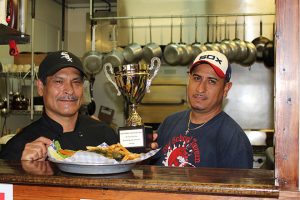 “The name of the restaurant truly describes what we are and what we do”, says owner Ted Hosty. “We use top-quality products, fresh beef that we patty ourselves and that makes the burger taste better overall” he added, “It’s a good old burger broiled to perfection.”

And broiling may be the secret to their success as the meat takes on a better sear adding more flavor to the beef. And speaking of beef Hosty says they go through almost 100 pounds a week of a special, less compacted grind of ground chuck. The burger is a “layers of flavors” build that starts with a brioche bun, butter or red leaf lettuce and high-quality beefsteak tomatoes, even going so far as to use Portobello mushrooms rather than the common white variety. 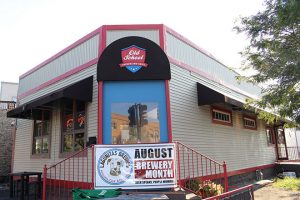 The “Big Mick”, named for a well-known customer, is one of the favorite burgers at Old-School and features a bacon jam made with Jack Daniels bourbon. (My recipe for bacon jam follows the Whine) “Our burgers are customized to each diner’s taste”, Hosty explained, “We use thick cut, wood smoked bacon and our fries are cut fresh daily in-house and are cooked in oil only used for fries, it makes a difference”. Speaking of cooking Hosty tells me that he has had the same two cooks for the six years that he’s owned the restaurant, that’s great cooking continuity.

I asked Hosty if he made any special efforts to encourage his selection and he tells me he posted a page from the Post featuring the contest in each bathroom and by the front door, seems appropriate. He says it’s the overall attitude of the restaurant that brings people back; we like to say “Even if you’ve never been here before you’ll feel like you have been”.

“We’ve been doing burgers for a zillion years” (39 to be exact) says longtime owner Goldy’s owner Mike Sullivan, “It’s a local neighborhood place (Circle Avenue) with a lot of history, we do pub food, we do good fresh meat burgers topped with the basics and served on a paper plate, the burger is its own thing, plain and simple, but tasty”. Sullivan tells me that people have even asked to buy his hamburger meat by the pound. 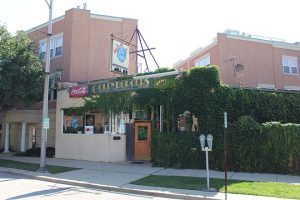 Goldy’s offers a selection of nine ground sirloin (higher quality meat than you would expect in a casual burger joint) burgers headlined by the “Famous GOLDYBURGER” ($7.45) and the rest of the list includes a Royal Burger with bacon and cheese, a Pizza Burger and Sullivan’s favorite, the Hawaii Burger with pineapple, bacon and blue cheese. He says he surprised at the number people that request burgers with blue cheese, “Would never have thought that blue cheese would be a big thing”, he remarked.

Goldy’s is well-known for its enclosed, outdoor courtyard where during good weather one can watch a ballgame and enjoy your burger and a beer. The history of the building dates back to a time before prohibition when the Goldstein family had a bar that fronted the street and lived in a small house, now the bar in the back of the building, which they eventually expanded into after prohibition was over.

“I don’t own a computer” Sullivan said, “So I didn’t even get to vote for myself and we made no notice of the contest in the restaurant so I figure we got all clean and private votes” he explained, “People come to eat here because of our long-standing motto, “Goldy’s, never had a bad one”.

“We sell a ton of burgers and I feel that’s because we customize each burger to what people want to eat, lots of cheese, grilled onions, Jalapenos and even a Prime Buffalo Burger” ($9.95), says third place finisher Jim Watts, co-owner of O’Sullivan’s Public House. 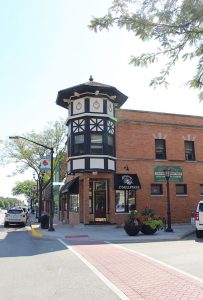 A distinctive cupola entrance marks O’Sullivan’s on Madison Street, that may have started life as a dry goods store, then a Chinese restaurant and today, Watts says it’s “Just a neighborhood tavern that appeals to a lot of families and seniors especially on Tuesdays when the “Hugh Burger” with cheese is featured along with “extra pickles”. The burgers are eight ounces from hand packed fresh beef and you can pick whatever cheese you like.

“We do support the St. Luke’s Men’s Club and they may have thought to support us but we did nothing to call attention to the contest and figured we should be able to win on our own” Watt’s remarked.

Aside from the fancy trophy, fame and great fortune that Old School Tavern & Grill has now received for its 1st place win, owner Ted Hosty has chosen the Forest Park Community Center Food Pantry to be the recipient of the $100 donation from The Post and they also receive a full page ad in an upcoming issue of The Post. Congrats to Old School, well deserved!

OK how about some fun facts with numbers. There were 834 votes cast, the top three finishers received 533 votes or two thirds of the vote total. Each of the winners I spoke with were somewhat surprised that other well-known names were missing from the list all together and that even McDonald’s, yes that McDonald’s got a few votes. Where are you eating tonight?