Bordeaux Châteaus Say They’ll Lower Prices, But How Much?

After Americans passed on the 2010s, the first-growths are hinting that they’ll drop prices substantially 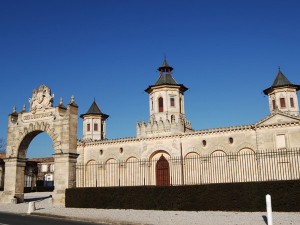 Wine professionals from around the world have descended upon Bordeaux for the annual tastings of the new vintage. This is Bordeaux’s moment to dazzle, with Michelin-starred chefs cooking for hundreds, jazz concerts, art exhibits—and thousands of barrels of wine looking for buyers. But price seems to be the topic on everyone’s mind.

Wine Spectator Senior Editor James Molesworth’s 2011 Bordeaux barrel tastings have shown a vintage of mixed quality. Two things make a price reduction within the realm of possibility: lukewarm Chinese interest and a vintage that doesn’t incite wild speculation. “Logically, the prices should come down, and that would allow Europeans and Americans to come back to the market,” said broker Max de Lestapis. And the top châteaus have already begun to tell people that they will release the wines at much lower prices than last year. How low? They’re not saying yet.

Futures are an investment. Négociants, importers, retailers, restaurants and consumers agree to buy wine approximately two years in advance of delivery, effectively financing the estate’s stock, in exchange for getting a good deal on the price. It only makes sense if the châteaus release the wine at a price low enough to leave room for appreciation. Consumers will be able to purchase the wine en primeur, as futures, later this spring, but for now professionals are here to make their shopping lists, and push for lower prices.

Many in America and Europe jumped off the en primeur train last year when the 2010 prices were released, giving up their seats to the Chinese. Loyal customers were willing to shell out for the 2009 vintage, despite record prices, but when 2010 prices were even higher, they balked. In a rare fit of pique, the staid négociant house Barriere Freres went so far as to write to its clients saying it refused to sell Château Rauzan-Ségla because the $110 ex cellar release price, a 40 percent increase over the 2009 price, was “ludicrous.” The market has proven them right—Rauzan-Ségla 2010 can be found today at retailers for $120.

“The Bordelais learned from their arrogance and incompetence last year, ourselves included,” said Jean-Guillaume Prats, CEO of Château Cos-d’Estournel. “The wines will be released early this year, and I think we will have some real interest from the U.S. if the prices come down. There has to be a substantial price reduction to make it appealing to Americans.”

“The 2011 vintage provides a chance for the Bordelais to reengage with the baseline Bordeaux consumer—the folks who like to actually drink wines rather than use them for speculation,” said Molesworth. “The excesses of 2009 and ’10 have fatigued the market to the point that it will not accept another high-priced vintage, no matter how the château owners spin it. The smart Bordelais will see this opportunity to get back in favor with a consumer that was left behind by the hype in ’09 and ’10.”

This year there are just as many Chinese in Bordeaux for the tastings, but châteaus and négociants are more excited about the first-timers from Brazil and smaller Asian markets. They’re also breathing a big sigh of relief about the arrival of Europeans and Americans. But those more traditional customers are still being cautious over prices. “There is some variation, of course, but I was pleasantly surprised by the quality,” Chris Adams, CEO of Sherry Lehmann told Wine Spectator. “This is a great opportunity to go back to how the system used to work. But if the prices don’t come down, we can’t buy it.”

This campaign could also determine whether the Chinese lose faith in the en primeurs system, after losing a bundle of money buying big last year. “En primeur as a concept for Asia is on a knife edge this year. It’s possible with another tediously long and drawn out campaign with high prices it could be the death knell of en primeur out here,” said Simon Staples, sales director at Berry Bros & Rudd. He was referring to last year’s botched timing. Drawn out, then rushed like a bad date, it annoyed seasoned buyers, and confused the Chinese. “It must be quick and a bargain. Nothing else will work,” said Staples. When prices of 2010 wines began to decline late last year, Chinese customers were unhappy that they had seemingly overpaid.

The châteaus seem to have received the message. “We will certainly lower our prices,” said Florence Cathiard, owner of Château Smith-Haut-Lafitte. But, she added, “We’ll wait for the signal from the first-growths.”

Gerard Perse, owner of Château Pavie, said it was obvious prices had to come down. “We can’t sell at 2010 prices. That’s not serious.”

So what is serious? Smaller châteaus made more modest price increases in past years, and can’t be expected to make big cuts. But the big names are being asked to make an effort in favor of traditional markets, with first-growths setting an example by dropping prices about 50 percent, to $390 ex-cellar. “This is the moment to bring back customers who drink our wine,” said négociant Antoine Darquey of Les Vins de Crus.

Classified-growths should start coming out this week, and executives at the first-growths have hinted that April 13 is their release date.