Looking at Wine From More Than Three Views

As you know I spend a considerable amount of time and energy following all aspects of the food and wine industry tasting, sampling and visiting with folks in the know so that you will know too and this edition of my “Whine” is no exception. I ask you to take note that each of the men pictured in these photos is smiling and involved with the wine industry and that gentle readers is the rest of the story.

Joe Glunz Jr. is always on the road searching for new and better quality wines and hand selling to both on premise and retail clients. “Customers are constantly on the lookout for new brands and looking to find new places where they can get wines they like and that are less expensive”, commented Glunz who represents the fourth generation of the 126-year-old Louis Glunz Wines Company as the Executive Vice President and appears to know of what he speaks.

“The health of the wine industry is picking up where it left off during the economic downturn, people were still drinking but they were drinking down to what their pocketbooks could afford” he mused, “Today’s sweet spot for wine is in the $12 to just under $20 range which is fantastic, lots of good wine out there in that price range. The just under $40 category has really started to pick up but above that is still on the slow side.” 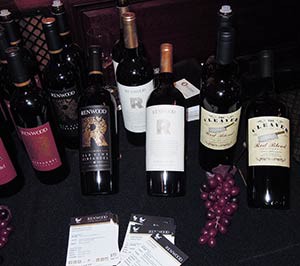 He told me that 60% of wine and liquor sales are in the holiday months and that in fact this past holiday season was, “…an historic time for our business as it was our best sales in the history of the company and I hope that it continues tracking with the growth of the US economy.” That’s why he is smiling.

(Full disclosure, Joe Glunz Jr. and I are acquainted from our days as original members of the Illinois Grape and Wine Resources Council formed in 1996 and unfortunately, since disbanded)

Also as a side bar local retailers report mixed results from holiday sales. Famous Liquors also reports record-breaking numbers where our local Binny’s was average and the four store Vin Chicago group (wine only) claimed they had to work to get back to even. 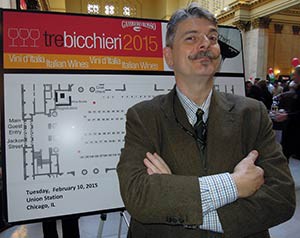 Interviewing Marco Sabellico, Senior Editor of Gambero Rosso (GR) is almost like interviewing an Italian movie director. As you can see he has the look and as I can attest, the lilting Italian English presentation that almost seems too good to be true.

GR is a highly respected and long-running wine review magazine for Italian wines. For 28 years they have judged 20,000 wines for final review by 70 tasters. GR uses a wine goblet’s symbol, one, two, or three to represent the best of the Italian wine products rather than the 100 scale we are familiar with.

“If you are sick of drinking Chardonnay and Cabernet then Italian wines are for you”, Marco boldly stated, “The American market is critical for Italian wine and we have many, many regions and styles for you to discover.” “Of course American drinkers have heard of Chianti but many have not heard of Chianti Classico or Riserva and even fewer of Valpolicella, which is a much underestimated wine.” He continued, “I’d rather drink a half a bottle of Valpolicella than a glass of Amarone”, declared Marco. (Amarone is a high alcohol wine)

And I agree with Chianti’s falling in a very drinkable range between Cabernet and Pinot Noir and they have been developed to match the foods of the Italian pallet both for red sauces and for lighter meats and pastas. Discovering Chianti Classico’s during our trip to Italy was one of the great wine finds of my tasting career. Valpolicella has a similar quality range of superior and reserve that takes these wines to a completely different level yet not to a price point that is out of consideration.

For good reasonably priced wines (less than $15) Marco says, “…look to the south central and southern parts of Italy which are yet to be discovered. “Primitivo (we know it as Zinfandel) from Apulia and Nero d’Avola from Sicily where it’s grown high on the sides of volcanoes in cool air and warm Mediterranean sun (see the current edition of Wine Spectator magazine) and may become the Malbec of Sicily.” That’s why this man is smiling. 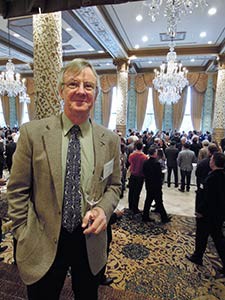 “If you are looking for a bottle of wine to poor for your dinner party tonight you can buy a 2012 Bordeaux and it will be delicious”. So says Paul Wagner who represents the Grand’s Crus de Bordeaux organization by way of a public relations firm in Napa County California and that’s a whole another story.

2012 was a cool, wet year in Bordeaux so the fruit didn’t ripen to the level it should and the blends are different certainly affecting the classic Bordeaux blends and flavors as well as classic Bordeaux pricing but that all works in our favor.” You can taste them, you can smell them, you can drink them, and you can afford to buy them, many for as little as $25”, stated Wagner.

I was almost shocked with the approachability of many of these wines, softer, rounder, with tannins scaled way back. “They had to make wines that were in balance with the vintage, these are very beautiful very soft wines”, says Wagner. “Cab ripens slower in a cool year but Merlot and cab franc then have to take on bigger roles so the wines are softer and less tannic and won’t age for 20 years so they are ready to drink today and into the next few years, just drink them”, he says.  And that’s why he’s smiling. 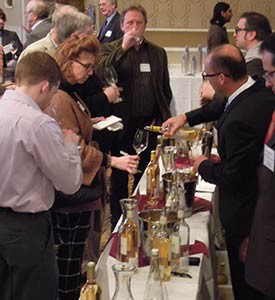 It seems unbelievable that you might be able to buy a Château Citran for $20, a Château Du Pez at $40 or a Château Marquis de Terme for $50. But seriously do your research and take some surplus gas money and buy yourselves a couple of bottles of 2012 Bordeaux and you won’t be sorry.