← “Whose Bubbles are These?”
What if You Had Nine Brands but Nobody Knew Your Name? →

Loyal readers will recall that I featured Ms. Montse Reece, the head winemaker at Pedroncelli several months ago (WW- Wine by Land and Water- March 2019) and the gist of the conversation was all about rain or the lack of it. As we wrapped up the conversation we mused about the opportunity to taste wines from dry and wet seasons in future.

Lucky for me that chance came and I visited with her at the winery in May tasting wines from a dry year, a rainy year and from one very hot summer moment. 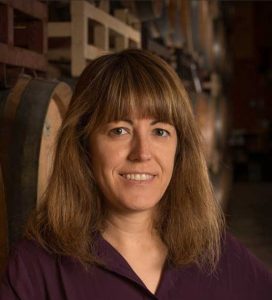 It was quite an experience, I felt as if I was a student in an advanced winemaking seminar. Her comments and thoughts made so much sense when I was actually able to taste the wines as she discussed the challenges of the particular vintages and what she was able to do with the grapes. It truly was quite a thrill and I hope you’ll enjoy our conversation.

Montse lays out her grape growing foundation explaining that winemakers in the Dry Creek Valley share the same deep, rocky soil in the upper benches of Dry Creek; the more sandy and damper soils of the old riverbed; and the weather – that’s what makes the wines different from the nearby Russian River to the south or the rolling hills of Alexander Valley to the east.

So let’s set the stage for review:

Unlike Cabernet, Zinfandel has large berries with a very thin skin and heat and water have a greater effect so in a year with rain it’s going to produce more plump berries that will affect the flavors and aromas of the wine.

Cabernet on the other hand with its thin skin retains more moisture and as soon as the heat dropped they returned to normal.

“We have our Zinfandel’s planted in the elevated soil of the old Dry Creek riverbeds which are harder and full of rocks which makes the vines work harder to produce fruit”, Montse explained. “The lower Dry Creek riverbed is looser soil with more sand and humidity (aka – moisture) – the Cabernets go there”.

We sampled the 2016 and 2017 Pedroncelli Mother Clone Zinfandel side-by-side.

Montse notes, “The 2016 was picked earlier so as not to develop too big of a fruit flavor, if you let the fruit hang to long some of the grapes turn to raisins and that concentrates flavors and alcohol creating “fruit bomb wines”- that’s not the style for Pedroncelli.

The 2017 (well reviewed and in the market now) is dark red with lots more fruit and is very rich with less acid and that gives the sensation of more roundness in the mouth. 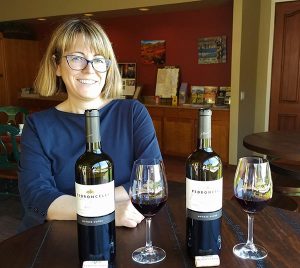 It was a unique year and the perfect example of how much weather impacts grapes. “I like to show the vintage and let it tell a story and the story was the difference that the heat spike made”, Montse states emphatically; “It’s the same wine, the same grapes, from the same place picked like crazy on the same days, the difference is the three days of heat.”

She finishes the interview by stating that “wine is a cultural thing, it’s not just a drink, it’s how we understand food and life and where we come from”.

And I certainly understand in a whole different way.

Wine and beer sales up at Costco

A recent on line news report shows that beverage alcohol sales at Costco rose 6% over the last fiscal year to $4.4 billion. The company is one of the largest wine retailers in the world, with wine making up roughly half of its total beverage sales—more than $2 billion last fiscal year. Spirits and beer split the remaining half relatively equally.

Costco has licenses to sell beer in 458 stores, wine in 448 stores and spirits in 317 stores. California, Florida, and Washington are some of the company’s largest-volume states for beverage alcohol sales and that those markets are still posting strong increases. 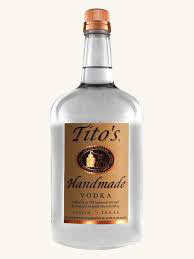 Here’s a little price comparison with Costco’s top selling labels and two other retailers, Binny’s (B) in Chicago and my local Santa Rosa store, the Bottle Barn (BB).

Note: Binny’s price reflects use of their free member card that provides a substantial discount

California wine sales are up

Despite a slowdown in overall wine sales, shipments of California wine grew 3% last year in the United States to a total of 248 million cases, an industry trade group recently announced.

Sales of all wine rose just 1 percent last year, but California wine — which accounted for 61% of the wine consumed last year by Americans — continues to dominate the U.S. market, according to figures released by the Wine Institute, the trade group for California wineries.

U.S. consumers spent $40.2 billion on wine from the Golden State last year, a 3.9% increase, the group reported. By comparison, they spent $27.9 billion on all other types of wine, including foreign imports and wine made in other states.

“Consumer interest in premium wines continues to be the dominant trend,” said Robert “Bobby” Koch, Wine Institute president and CEO, in a statement. “As consumers trade up, our California wines are emphasizing high quality, value and sustainable winegrowing.”

Congratulations to you folks in Tennessee, you’re about to join the 21st century as the court has voted to overturn a state law that required owners of stores selling alcoholic beverages to have lived in the state for two years before applying for a license, just a little local protectionism. Just wait and see what Total Wine & More amongst others, does to prices and selection. Drink up!

Look for a highly rated Adult Grilled Cheese recipe elsewhere on the site and pair with the Bread & Butter Rose’ or a simple sparkling something. Find the B&B at Mariano’s in the Chicago area and at Hy-Vee’s of all places in Springfield, IL.