Smoke Gets in Your Eyes

Writing from the burnt edge of the Russian River in Sonoma

By the time you see this Whine the fires will be old news, hopefully long out, we are safe and life is ongoing but the loss of the homes, business and life will change the region for quite some time. It was a mental and emotional stress that I have no interest in ever experiencing again. 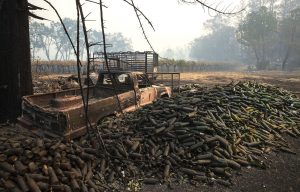 As many as 15 wineries were completely destroyed or damaged but the real issue; there was still some 10% of Cabernet to harvest and not only were grapes still on the vine and at risk but there was juice in tanks that required cooling and handling which requires electricity, something that was in short supply in many areas around Sonoma and Napa counties.

I met and worked with Chris Benziger of Benziger Family Winery at the 2016 Chicago Gourmet event. He and his family were not only burned out of their home but then burned out of their evacuation house and he only had limited access to the winery and wine in his tanks by special escort.

The other issue concerning wineries in and around the fire area was/is smoke taint and to a lesser degree the fire retardant dropped by the army of planes not on the fires but in advance of them – it’s not good for grapes or people. The smoke was acrid and filled with a lot of not only burned trees and brush but the byproducts of incinerated houses and cars, again not good.

(Nov. 14th update) The rate at which smoke taint aromas appear in a wine is often dependent on that wines acidity, temperature of aging and phenolics. “It can be several months before a wine starts to show ashy, smoky characters”, according to José Santos, president of Vinquiry laboratory. “The degree of taint, if any, is still being determined, as the juice results usually tend to trend lower than those past fermentation,” said Randy Ullom, winemaster for Kendall-Jackson.

Several wineries have turned down juice from some growers in fear of smoke taint. As I have now read, it can linger and reappear later in the wine making and storage process which actually exacerbates the issue. Remember this is juice and wine that will not be on the market until late next year or the year after, nothing in the market place today is affected. Wine country is just fine and open for business and in fact I’m sure there are bargains to be had as people have apparently canceled trips in mass.

Cannabis was hit even harder as the fire destroyed untold acres of legal and illegal pot as well as many buildings and warehouses.  Only the warehouses are insured as cannabis is not covered by crop insurance, nor can growers get loans from federal recovery funds so growers lost everything with no hope of compensation, all up in smoke, literally.

I’ll move on to holiday food and wine but here are two quotes that really sum up what has happened. The owner of Kunde winery was forced from his burning home in the Kenwood Valley. “I pulled up to the highway and had to decide to turn left to safety in Santa Rose or right to the winery and who knows what, I turned right”. The owner of the strikingly lovely Paradise Ridge Winery, a highly sought after events site, high in the hills of northern Santa Rosa is on camera surveying the remains of his burned out buildings and with some irony tells a TV reporter, “We were supposed to get an award tonight for the best place to hold a wedding”.

How’s about we visit some wine that’s already in the bottle.

Lettie Teague, wine writer for the Wall Street Journal recently reviewed wines from big box stores. I was taken by some of her casual thoughts just in time for your holiday shopping: 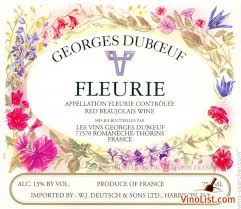 As to wines for Thanksgiving the 2015 vintage from Beaujolais is terrific and they are great. Here’s a couple from Chicago area sources and I’m sure your retailer will find something similar.

I was taken by the length and breathe of the Sonoma Harvest Fair judging.  Here’s a selection of winners all under $30, at least one of these will work with some part of your holiday meals and parties.

While wine is truly all around me those huge trade tasting events that I used to attend are no longer available to me (sad) but here’s some new tastes and a few from the past that are still great. Both of the Gloria Ferrer’s were winners at the Harvest Fair judging.

I’ve run out of words and by now if you don’t have my turkey and dressing recipes you’ll have to find them on the web site. Since everything is so sourdough around here I couldn’t pass up the chance to offer up this dressing.

My hopes for a wonderful holiday and New Year don’t be afraid to write or call.