← Of Hot Dogs, The Challenge to Restaurants, Best Sandwiches Some Time in Napa and Wine Smoke
Notes Regarding a Cheese Exchange, A Wine Tasting and Hand Sanitizer: You’ll Get It →

It pains me to tell you that as of this writing in the first days of October, fires are raging across Napa and in portions of Sonoma County. Our area was threatened earlier in the week and smoke and ash were in fact quite a problem for several days and may be again, but we are at the moment, safe but ready to respond if things change.

That being said the damage being done to wineries and to the grape harvest in general is of major proportions and its impact will not be known for certain some time into the future but reports indicate that several major wineries and a notable resort have been destroyed along with many homes and other structures.

A smattering of Napa Valley wineries and swaths of their premium vineyards suffered heavy damage or were gutted, as the Glass fire swept through Sunday (9/27) and continued burning Monday in the midst of an already challenging wine grape harvest.

So far, Sonoma County wineries have been spared serious property damage from this blaze. However, by late Monday there were concerns about smoke and nearby flames in the Sonoma Valley, wine industry officials said.

And with this conflagration on the heels of August’s Walbridge fire in Sonoma and the Hennessey fire in Napa, vintners predicted the region’s 2020 harvest essentially would end because of the high risk, since only smoke-damaged grapes were left on the vines. This year’s harvest started early at the beginning of August and without wildland blazes was expected to go through October.

Two of Napa Valley’s most prestigious luxury resorts, Meadowood and Calistoga Ranch, have suffered significant damage. Brett Anderson, Meadowood’s director of culture and communications stated, “We don’t know the extent of the damage, but we have seen the photos of the fire posted by first responders on social media and are heartbroken,” he told Wine Spectator. 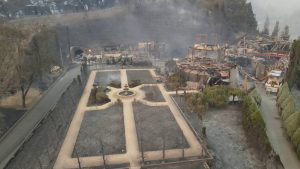 Burgess Winery on Howell Mountain was destroyed in the fire, although damage to the vineyards was minimal. On Spring Mountain, Newton Vineyard’s staff reported that the winery was significantly impacted by the wildfire.

If you care to see photos of firefighting and the resulting damage in the region please visit the www.pressdemocrat.com

Jason Hanson expects his crews may only harvest five tons of grapes, including his Chardonnay and Gamay varieties, down from the 25 to 30 tons his fields yielded last year. “The birds can have the rest,” he said, as the fruit has likely absorbed too much smoke to be salvaged and would produce wine that tastes like a “wet ashtray.”

Many tasting rooms remain shuttered due to fire and smoke risks, while grapes awaiting harvest in storied wine regions like Willamette Valley in Oregon or California’s Napa and Sonoma Valleys may be damaged or ruined entirely.

Oregon, Washington state and California together produce about 90% of all U.S. wine. The true impact on the $70 billion industry will not be known for months as the typical wildfire season is only just beginning and crop damage can vary greatly from field to field.

Fortunately many wineries had begun harvesting early due to a heat spike around the Labor Day weekend but more serious grapes like Cabernet were still hanging, especially in Napa and will probably be lost due to the smoke taint and either left “for the birds” or simply plowed under.

This forced reduction in the size of the harvest may in fact be a blessing as there is an overabundance of wine available from previous harvests which makes the 2019 vintage look all that much stronger.

“This is the first variation of the Original Chick-fil-A Chicken Sandwich we’ve tested as a seasonal item,” Chef Stuart Tracy, a senior culinary developer, said in a statement. 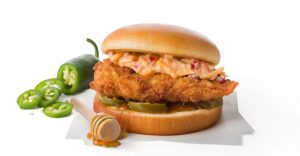 The sandwich comes with the original filet topped with honey, pimento cheese and mild pickled jalapeños. Like other sandwiches, it is served on a toasted bun.

It is available for a limited time at participating restaurants in upstate South Carolina (not) and the Asheville, North Carolina area priced at $5.39.

Tracy, the chef behind the original indulgent sandwiches at Butcher & Bee in Charleston, S.C., took inspiration from the standout flavors that make for best “melt-style” sandwiches. That led to a “savory, salty, sweet and melty” sandwich that appeals to a wide variety of flavor palates, the company said.

“We have a feeling guests will love it.” Tracy said. And do they love it, at least one does.

Now loyal readers will know how important it is for me to provide you with “hands-on” reports of new food offerings but you’re saying don’t tell us you traveled to North Carolina just to try a chicken sandwich  – and you would be correct.

Ahh, but guess who has a BFF formerly of Springfield Illinois now living in an oddly named town called Indian Lands in South Carolina that is somewhat close to North Carolina. I spent several hours trying to track down a Chick-fil-A that was sampling the sandwich in that area as their press release claimed it would be, to no avail.

My friend Pat discovered that the new sandwich was in fact available in – Asheville North Carolina, a mere 2 hour drive from his residence and so off he went under his own power. 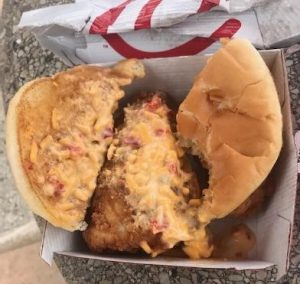 While Pat is not a trained tasting panel member he was good enough to call me from the site of his sandwich purchase and offered the following “live” evaluation;

“Looks pretty good, the cheese has melted on the chicken, this is really good with a wonderful taste of the cheese, sandwich is really tasty and every bite has good taste.”  And in a telltale statement as to how successful the sandwich could be he stated, “…they can’t make them fast enough.”

So if you’re passing through Asheville North Carolina and need something to do for lunch and like pimento cheese with honey and jalapenos on your deep-fried chicken, I’d make it a stop.

Hard Seltzer Remains an “It Drink”

Wine coolers were the rage in the 1980s as one of the first “it drinks.”

The most recent “it drink” is hard seltzer, also known as spiked seltzer or hard sparkling water, contains carbonated water, alcohol and flavoring. The alcohol usually comes from fermented sugar, though in some versions there is vodka or malted barley.

The amount of sugar is generally low however, and the alcohol count is often fairly low too, usually around 5%, though the vodka-based sparklers can get higher. 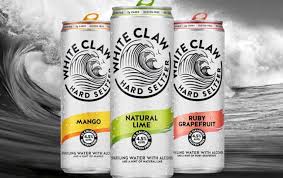 White Claw really got the ball rolling; according to Nielsen, the brand’s sales were up about 250% in 2019 over the previous year. The marketing research firm said the entire hard-seltzer market tripled last year, reaching $1.3 billion, and has remained strong. Many big beer brands, including Molson Coors, Corona and Budweiser have stepped into the market this year.

Hard seltzer is designed to be a lightly alcoholic, not-so-serious sipping drink for people looking to imbibe in moderation. Many hard seltzers have about 100 calories per can.

Most of all, they are designed to be fun, available in an array of flavors and versions, with new ones popping up all the time. Most of the flavors are light with many brands boasting all-natural ingredients and artisanal craftsmanship and the packaging is generally lively and colorful.

You turn down a road that only has a number at the entrance and no name and you arrive at a gate where you must call for entry and drive into the highly manicured grounds to an artistically designed building – you have arrived at the Paul Hobbs winery all after making what seemed to be secret reservations. 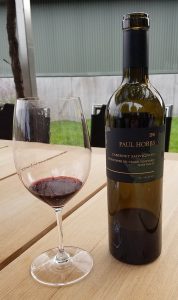 Hobbs is a highly respected winemaker who has a long history with major wineries in Napa and Sonoma as well as some international claim to fame. He produces small amounts of well-reviewed wines and sells everything to a subscription mailing list that has a waiting list.

Due to the impact that the Covid situation has had on winery tourism we were able to schedule a tasting which was an excellent experience and as part of that tasting I got to try a Napa Cabernet that lists for $300. The problem is I’ve never tasted a $300 Cabernet so I’m not sure if it was any good or not, 🙂 but it tasted okay to me.

My recipes for Ham glazed with Dr Pepper and prunes that you’ll drink with a Red Zin and a Salmon filet marinated in olive oil with shallots and tarragon and are in fact right here, enjoy!