← Two Big Wins, Wine $$ Set to Take Off, Not So Fast for Gallo in S.C. & Lots More Fun Stuff & of Course Chicken Sandwich News
Winner, Winner Fish and Chicken Dinner – HMMM, Not So Much, The Birth of Bombastic Butter Bombs, Some Reasonable Reds →

With conditions improving early in the month California wineries are able to offer outdoor tastings and we took advantage of an opportunity to visit some and sample wines from their vintage libraries, a sort of behind the curtain opportunity that doesn’t come along too often. Also to our delight we finally found a pretty good chicken sandwich but also some bad fish. And Gallo gets bigger in South Carolina and a list of “house” Pinot Noirs.

Don’t Ignore That Cabernet Behind the Library Curtain

During the first week of March we took advantage of a terrific opportunity as well as great weather and signed up for library wine tastings at seven wineries in Alexander Valley, Dry Creek and the Russian River. 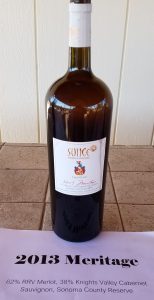 A library tasting says a winery is willing to offer a sampling from older bottles, in some cases a vertical of the same wine of consecutive years or a comparison of older vintages to the same wine of a current vintage. Either way it’s quite a treat and a great learning experience, so I wanted to share the highlights.

The fine folks at Pedroncelli where we are also wine club members were pouring an ‘09 Merlot and a current vintage 2018 Merlot as well as a ’10 Zinfandel also against a 2018 Zin.

The older wines had begun to fade but were still there and showed the competence of the winemaking as well as the aging ability of the wines, great way to start the day.

The Francis Ford Coppola winery is a huge country club style operation bordering on the point of a Disney like setting, with dining, a swimming pool on a huge veranda where you can rent cabanas for the day and the message is “bring the family” out for wine tasting. 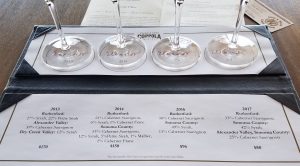 Their offering – “Eleanor”, was a vertical tasting of what I would call an experimental wine and if you take a good look at the tasting menu in the photo you’ll see what I mean. I’m not sure I know of anyplace else that’s blending Cabernet from Napa and Sonoma with varietals from two other Sonoma regions and then charging those sorts of prices for it. The first two wines were actually quite good, I could taste the Sonoma dirt in the 2014, but the wine is a tad pricey as well as the event at $45.00 dollars per person.

The family owned Sunce winery was pouring vintages from magnums, (title page photo) a unique treat as the wine in that size bottle ages slower due to the volume.

The 2013 Pinot Noir still had a touch of tannin in the finish, their Merlot was soft and round and the Meritage of Cabernet and Merlot were nicely balanced. 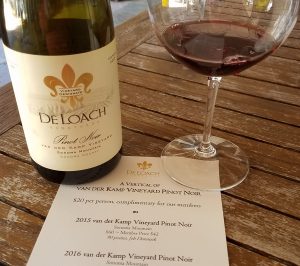 The well-known De Loach winery presented Pinot Noir from a vertical of vintages all from the same vineyard. It also offered the opportunity to sample the same wine from a drought year, 2015 and a rainy year, 2016. The wines actually took on a feminine and masculine sense with the dry year being more delicate with the lack of moisture and the following wet year was big, round and juicy.

New to us was Moshin Vineyards deep in Russian River Valley where we were entertained by their fine Pinot noirs and their sense of humor, calling their 2012 Bordeaux blend of Cab and Merlot “Perpetual Moshin”….

A truly interesting and informative weekend 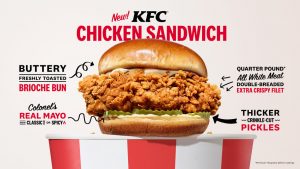 KFC “Best Chicken Sandwich Ever” – the Marketing Pitch
The new KFC Chicken Sandwich is expected to delight the most discerning of chicken sandwich connoisseurs in every way – from the quarter-pound, all-white meat, double-breaded, Extra Crispy™ chicken breast filet, to its freshly-toasted buttery brioche bun, crispier, thicker pickles, and the perfect amount of the Colonel’s real mayo or spicy sauce. $3.99 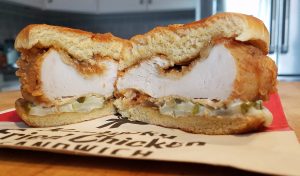 The Crispy Chicken version brought an amazingly similar comment from a member of the tasting panel, “That’s a great piece of chicken” (KFC) to the first bite, “Now that’s a piece of chicken”, from our Popeyes chicken sandwich tasting of just over a year ago. $3.99

The chicken looks and tastes perfectly cooked and the sandwich is well constructed – pickles are well-placed and the sauce covers the entire side of a bun. There’s just bun, pickles, sauce and well cooked chicken.

The chicken crust has a nice flavor and the seasoning is perfect but isn’t as crispy as Popeyes and doesn’t look a thing like the marketing picture.

The Spicy Chicken sandwich sauce has a bit of heat that lingers; it does seem that the sauce covers the flavor of the chicken instead of enhancing it though.

On a very positive note the KFC chicken sandwiches featured a beautiful, thick cut, portion of chicken that beats everything else we’ve tasted by far – except Popeyes.

The KFC people did exactly what I’ve suggested, they went out and bought a Popeyes chicken sandwich and tried to duplicate it as a direct challenge to Popeyes – and they almost did it.

If you can’t find a Popeyes, stop in at KFC. 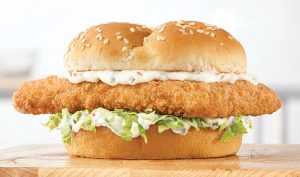 Put away your fishing boat and rubber fishing pants. Arby’s wild-caught Alaskan Pollock is crispy-fried to golden-brown perfection. We top it with tartar sauce and shredded lettuce. 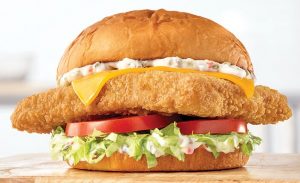 Just for the record this sandwich came out of the sack less than three minutes after we bought it and we ate it from the open back of our SUV – and it still wasn’t very good. 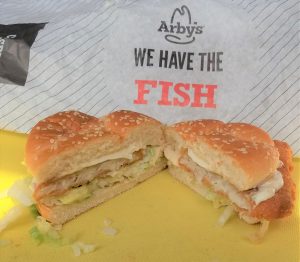 “I’ll give them crispy and it has tons of sauce (with no flavor) but the chopped lettuce is everywhere and does nothing except fall off the sandwich.” A tasting panel member said the lettuce made her “angry” also noting that the fish was crispy but had no flavor

I found the fish fillet to be an ordinary rectangle of heavily breaded fish product, certainly not the “wild-caught Alaskan Pollock” that was stated and looked nothing at all like the PR photo. “

Fish sandwich deluxe with tomato, lettuce and apparently some kind of yellow cheese on a Hawaiian bun for no apparent reason. 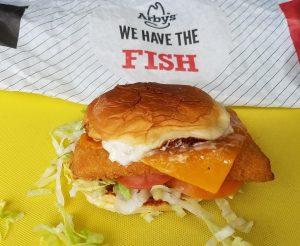 The assembly of the sandwich was less than proper, have I used the word horrible yet? Then let’s call it horrible. “All I taste is tomato and way too much lettuce falling out of the bun and the bun tastes better than the fish – the use of the Hawaiian bun is a waste”.

Tomato and cheese, (on a fish sandwich) while appearing to be a good idea, just makes it even sloppier – have I mentioned more horrible.

The tasting panel agreed that this sandwich was a winner in one category, out of all of the fast food chicken/fish sandwiches we’ve tasted over the last year or so, the Arby’s Deluxe Fish Sandwich was the worst, oh and have I mentioned horrible. $5.99

E. & J. Gallo plans to build a new bottling plant in Fort Lawn South Carolina, a facility that would serve as Gallo’s main hub east of the Mississippi. Modesto-based Gallo, the world’s biggest wine company, plans to invest more than $400 million over the next eight years and hire nearly 500 employees, “This is really intended to be our East Coast home for the Gallo enterprise for decades and decades to come,” Offered Rob Donoho, head of Gallo’s global chain functions.

The plant, that may be rail served, would be designed to bottle wine in different formats, including glass, cans, bag-in-box and small plastic bottles. It will also be a warehousing and distribution center for wine bottled in California and shipped to Chester County, S.C.

There are major economic and environmental benefits of having the plant in South Carolina, given that about 70 percent of its customers are on the East Coast.

Shipping heavy glass bottles and cardboard cross country is “very expensive.” It will be much cheaper for the company to ship its wine to the East Coast and source the glass and other packaging locally, Donoho also noted the “sustainability” benefit of “not burning as much fuel to get the product to the consumers.”

Woody’s Note: Several major brewers figured this out a few years ago and opened plants and distribution centers in North Carolina and other nearby states. 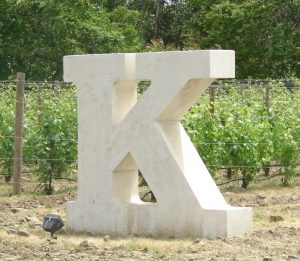 The collaboration will begin bearing fruit in the form of a K Vine 2019 single-vineyard Chardonnay, as well as a 2020 single-vineyard rosé. Both will have a price point of just $9.99, despite the fact that a winery brand now has its name attached.

While some winemakers may not want word getting out that they’re working with Costco, Smith doesn’t shy away from putting K Vintners’ name on the bottle.

“I insisted on it, actually. I wanted people to know that we own it,” Smith told Costco Connection of his decision to make K Vintners a not-so-silent partner.

How About a Little House Pinot Noir

Don’t know about you folks but we keep a cooler full of vintage wines that we have aging for our use on Thursdays and Saturday nights. A lot of other days we go looking for one of our “house wines” for a casual meal and we’re talking something in the $9 to $12 dollar range. Finding a good house Pinot can be a little tougher because it’s a more expensive grape but you know I like to take care of you kids so I’ve been researching and here’s three pretty good ones with names that you may recognize at remarkably good prices.

Since we didn’t have a chance to drink any of these before deadline I thought I’d make this a twofer; I have them showing in the photo by the price point that I paid and next month I’ll have them in the photo showing how we rated them when we tasted. Do note that Castle Rock puts out at least two versions of their Pinot this one being from Mendocino and another from I think from Paso Robles. Prices are in the order of appearance and what I paid at the Bottle Barn: Castle Rock $17 ($8.99), Murphy Goode: $15($10.99), A to Z: $20 ($13)

See you next month, drink well.

It was maybe 1975 when my band played an afternoon wedding at the Como Inn on Milwaukee Ave. at the Kennedy Expressway connector on the near west side of Chicago. I imagine some of you from the city may recall it as a unique Italian restaurant with a feel of a private club; I still miss it to this day. The Marchetti family opened the restaurant in 1924 and the sons closed it 77 years later in 2001. They moved just east on Erie and opened Galleria Marchetti to show case their Ferrari collection and create an event space still in operation.

Among the many dishes they were famous for is their version of Chicken Cacciatore that I humbly offer to you with a few updates.