Tasting Out of Town Wine in Town and Bad Biscuits

Writing from the edge of the Russian River in Sonoma

It was our pleasure to have toured down the Oregon’s Willamette Valley some eight years ago where we enjoyed the casualness of the area and found the wines to be very good so I was quite happy that just prior to everything shutting down, we were fortunate to attend a wine tasting in San Francisco presented by the Oregon Wine Board.

A Taste of Oregon Wine and Cheese 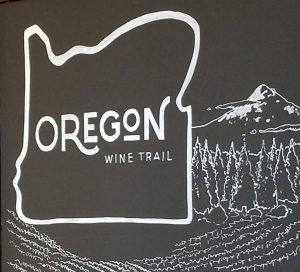 Oregon has seen a fairly dramatic increase in wineries over the past few years now numbering some 800 and I was curious to discover if the growth was too fast.

“Not necessarily, it’s measured growth and depends on who’s buying, whose selling and whose opening”, remarked Sally Murdoch, Communications Manager for the OWB. “There’s a lot of discovery (going on) as the soil is wonderful and by that I mean it’s terrible soil but great for growing grapes, the French and Californians love our soil as Oregon and parts of France are on the 45th parallel, running north through Aquitaine and just north of Bordeaux. 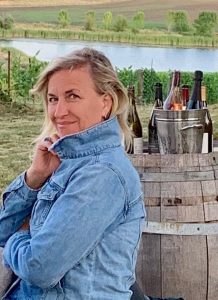 When I asked Murdoch about price point she offered that the demand for Oregon wine remains, even at its elevated average price point of $16.41 per bottle of Oregon wine vs. $7.62 for the average domestic bottle of wine. According to new Nielsen data for the 52 weeks ending Dec. 29, 2019, Oregon is still far outpacing the growth in other wine regions. Digging deeper, Oregon’s growth is driven primarily by increasing availability, which is helped along by great notoriety of Oregon wine in places outside of Oregon.

There is no question in my mind that Oregon produces terrific wines, many in the Burgundian style and do keep in mind that Pinot Noir, cost wise is a more difficult grape to grow and to produce and results in higher prices most anywhere it is grown, California included.

Murdoch pointed out that back in May 1973 winemakers David Adelsheim and David Lett (The Eyrie Vineyard) recognized vineyard zones in the Willamette Valley that needed to be protected and championed legislation that created land-sure laws. These protections have help the wineries maintain a small town and rural feeling offering the visitor a completely different experience from other wine areas.

The above sentiment is also echoed by Oregon’s cheesemakers. “Wine is tough, cheese is even harder”, offered Katie Bray Executive Director of the Oregon Cheese Guild. The Guild featured a sample of Oregon cheeses as part of the wine tasting event. 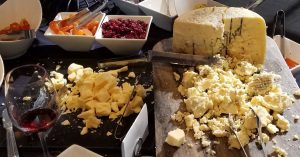 The guild’s members, only 22 by today’s count, mirror the same standards that the winemakers operate under. It’s a collaborative community of artisan makers who not only represent the best of the Oregon pioneer spirit but exhibit care for the land and for the craft that goes into cheese making.

Many of you will recognize the largest producer of Oregon cheese, Tillamook Creamery with their distinctive black and orange wax-covered packaging. They produce over 500,000 pounds of cheese a year that’s quite a contrast to the smaller farms that may only produce 2,500 pounds. Bray offered that Tillamook is now producing an aged series of cheeses that are only available in specialty type stores; I’ll have to look for those in the future.  She also offered that salty, firmer cheeses match best with Pinot Noirs. I also like Gruyere and nutty goat cheeses. 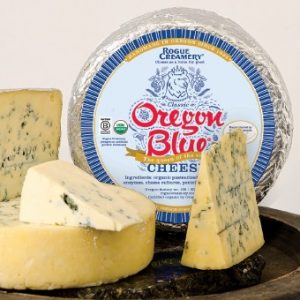 I enjoyed the blue and several other cheeses that were offered and my Midwest roots were teased by the fact that cheese curds were available but unfortunately were spicy flavored and not wine friendly.

Besides the Tillamook cheeses that are in national distribution also look for the international award-winning blue cheeses from Rogue Creamery and goat cheese from Rivers Edge.

We found these Pinot Noirs to be outstanding for the price and most should be available in national distribution: 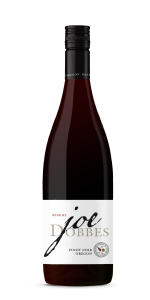 Note to you Lake Tahoe travelers a sister tasting room, Willamette Wine Works has opened in Folsom CA. just south of I-80.

Some bad biscuits and other tales of woe

“The company is declaring March 2 National Egg McMuffin Day in a clear move to disrupt Wendy’s national breakfast launch by announcing plans to give away the iconic breakfast sandwich on (that) Monday.”

Note: they are giving away Egg McGuffins’ rather than the chicken biscuit, hummm.

“The fast-food giant is streamlining its kitchen operations during the COVID-19 pandemic by suspending its popular all-day breakfast option.” 3/27

“Wake up with a McChicken Biscuit, made with a crispy chicken fillet and a biscuit that’s baked to perfection and brushed with real butter, or enjoy a Chicken McGriddles®, made with sweet maple griddle cakes. Try them now, available for breakfast at McDonald’s nationwide”.

Well loyal readers in the opinion of our tasting panel McDonald’s could’ve shut down the chicken biscuit and McGriddles and nobody would’ve missed it. As always we venture out to provide our advice so that you don’t have to when it comes to fast food competition.

A production note; as a result of the closure of restaurants for dine-in all of the sandwiches were purchased at a to go window, returned to headquarters and reheated in a microwave so there may have been some adjustment of flavor, but frankly…I doubt it. 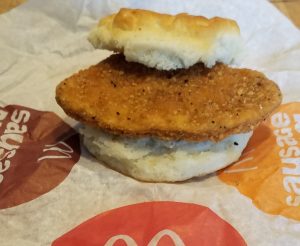 While I also ordered a Chicken Mcgriddle I got two biscuits instead and returning was out of the question. Other reports on the sandwich claim it has a very sweet flavor and is a piece of chicken between two small pancakes (where’s the waffles) so no loss here except for the extra dollar I was charged and didn’t get what I asked for.

“A crispy, chicken fillet perfectly seasoned and topped with maple honey butter on a fluffy buttermilk biscuit. It’s sweet, it’s savory, and it’s a great reason to get out of bed in the morning”. 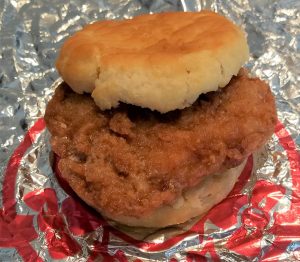 Why would you buy any one of these at all when in fact you can have an Egg McMuffin which aren’t bad, if necessary? 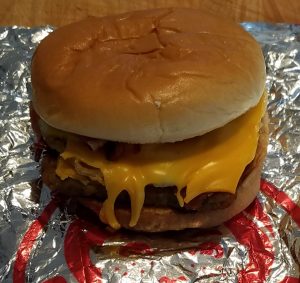 A huge sandwich on what tastes like a simple hamburger bun that doesn’t hold up to all of the products inside of it. It’s totally too much for breakfast and funny thing it’s called a Baconator but you can’t taste the bacon because of the spicy sausage which is good but way too spicy and overpowers all of the flavors. You can’t taste the egg because there’s too many other flavors involved. $4.39

A fresh-cracked grade A egg and Applewood smoked bacon covered in creamy Swiss cheese sauce on a flaky croissant bun. Breakfast basics worth waking up early for. 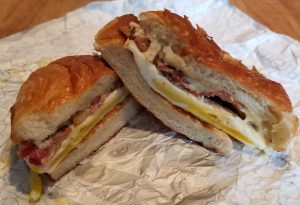 What they’re calling a croissant is square and doesn’t taste like a croissant and in fact is rather breadie rather than light and fluffy.  Egg is cooked well and you can taste it but again there are too many other flavors involved. $3.89

None of the items were considered tasty and had no real flavor profile, there’s no reason to buy them again.

The most salient observation from a member of the tasting panel pretty much sums up our feelings; “This isn’t what they should be doing, just stick to their hamburgers”.

We tried to taste a Chick-fil-A breakfast chicken sandwich but what do you know they aren’t available at the Santa Rosa store and it would have been over 45 minutes round trip to the next closest location. From other online reviews I find that they’re not very good anyway, just a piece of chicken and a biscuit without any sauce or flavors much like the McDonalds.

As you might imagine there is bad news everywhere regards the food business and industry and the wine industry in California has not been spared. We are deluged with emails offering discounts and free shipping from wineries we’ve never even been to or driven by. It’s my fear that many of the smaller operations will not be able to survive assuming this issue lasts somewhat longer than many predict. That means a loss of these independent flavors as corporate wineries will more than likely buy them out on the cheap.

I’m sure you are worried about local businesses in your areas too and our concern also covers the smaller mom-and-pop restaurants who I’m sure will not be around when all of this clears up. We are doing what we can to order carry out at least twice a week in hopes of maintaining some semblance of order.

Please don’t hesitate to reach out looking for recipe advice as I have many that are simple and fancy.

Recipes for my roast beef and some creamy mashed potatoes are elsewhere on the site.