← Gallo Gets Really Big, New Spicy Chicken, a Moment in Time for Wine at the Governor’s Mansion and Matching Wine with Chocolate
How Is Your Wine Store Laid Out? New Wendy’s Chicken Sandwich, Lord Snort Celebrates a Fourth Birthday, Pretzel Rolls, Irish Butter and More! →

The Brad and Jim Show, A Pork Apology, Wine Shipping and How a Bacon and Wine Tasting Went Wrong

I’ll be sharing a great new source of wine information and entertainment with you, offering my apology for some bad temp information; providing information on the cost of shipping wine and telling you how a bacon and wine tasting went wrong in this edition of “Woody’s Whine”.

Hope you all had a great New Year.

The Brad and Jim Show

The J. Rickards winery sits on the side of a hill high above Route 101 just north of Geyserville in the Alexander Valley appellation. We discovered the winery a year or two ago and are happy wine club members, but what we’ve only discovered a few months ago is the “Brad and Jim” show.  A behind-the-scenes look as to what’s going on in the vineyard, the winery, and the bottle on any given day.

Jim Rickards is the owner and grape grower for his signature winery and is a staunch supporter of working with others to promote the common good of wines from the Alexander Valley, a region noted for high quality Cabernets.

He had been doing a monthly Face Book event but with the advent of Covid and the limiting of visitors and tastings felt the need for a bigger media presence and reached out to winemaker Brad Beard of Mercury Wine in Geyserville. 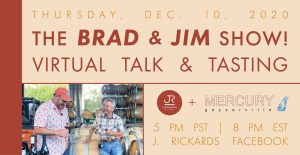 “I thought it was a fantastic idea” Beard said, “Jim is a longtime grape grower  dating back to the 70s and I’m a more contemporary winemaker and not so much a grower so we have two different perspectives on winemaking as well as a lot of crossover with our passion for making great wine”.

Concept wise the idea of the “Brad and Jim show” is fairly basic. “As a grape grower I can tell people about how that’s done but I also wanted to add information about winemaking” Rickards detailed, “So I thought it would be a good idea to have a winemaker and a grape grower bounce ideas off of each other  so that people might learn more about winemaking from our discussions.”

“Brad has a marvelous pallet and a great understanding of how wine is made and I think we complement each other with our strengths and abilities”, offers Rickards. “I tend to be a little more grounded in teaching and feel that it’s never a bad day if you learn something. Brad is on the other hand is a bit more textural and somewhat more out there”.

“While I understand what goes into growing grapes Jim has years of actual growing experience” Beard remarked, “I came up from the other side of things working with high-end restaurants and distributors and am blessed to have had winemakers from around the world help educate me. Helping people understand the subtleties of wine is my passion and I try to do it in a nice way so that people enjoy and understand”, Beard noted.

Having met both gentlemen they are the perfect foil for each other;  Jim being the senior member is more grounded and has the tendency to guide the discussion between the two quite well as Brad on the other hand is a tad more excitable and finds something good to say about anything he’s discussing.

The program is truly a behind-the-scenes look at what is taking place in the vineyard, in the winemaking process or in fact in the barrel as the wine ages – and you are allowed into the process with two experts, who are discussing what’s been happening in the past few days or even at that moment as they taste from wine tanks and barrels.

“Winemaking is not a serious process, we’re not saving lives here” Jim remarks, “Wine is really more of a food item and it’s the process of how we go about making the wine and how we go through the that process is what I wanted to illustrate”.

There are big plans for a food and wine matching show to hopefully start the first of February. It will be a zoom based show that matches a four course meal with wines. Each week will feature one course of the meal and the wines that will match with it. Brad shared that he had just completed putting together his recipes when we talked several days ago.

You’ll be offered a recipe kit and wine list in advance giving you the option to taste  along with Brad and Jim and to comment and ask questions – sounds delicious.

(Program note; with the total shutdown of northern California in effect as the result of Covid the Brad and Jim show is in a brief holding period but you can still see all of the past shows at their Facebook page. Search for J. Rickards winery to find the “Brad and Jim Show”. 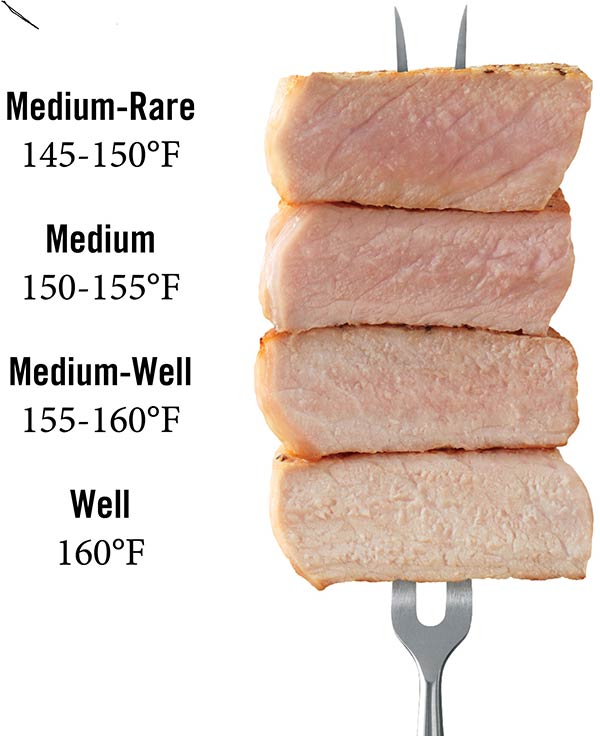 Last month’s “Whine” featured a recipe for Bacon Wrapped, Sausage Stuffed Pork Tenderloin. While I included the correct finish temperature for the pork roast at 145° according to the USDA, I misinterpreted the resting time for the roast which allowed the temperature to rise to almost 160°. If you take a look at the little chart included here you’ll see that 160° is “well done” and while our roast was tasty enough it was tough as pork reacts severely to being overcooked.

I am including the recipe again with the correct instructions in this month’s edition .

You have my pork apology.

The Cost of Shipping 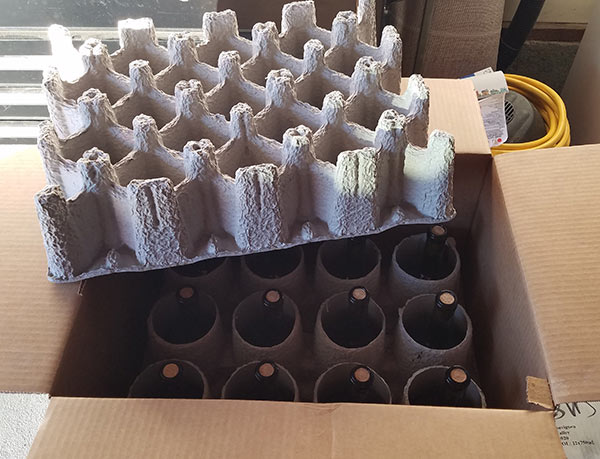 There’s required permits for each state you ship to as well as the required taxes to that state as well as the actual cost of the shipping that can vary from $40 anywhere in California to $120 to Kentucky: $77 to Michigan and $292 to Alaska, and that’s ground, not three day express; wine is heavy, fragile and vulnerable to heat, humidity and vibrations.

I buy from a broker in Napa who ships wine to me in Sonoma (I’m not allowed to pick it up) for $29.00 and will not ship during the summer months but holds it in temperature controlled storage.

So you’ll understand that “free shipping” that is not a common phrase in the wine industry despite the “free-shipping hypnosis” that Amazon and other online retails have lulled us into.

California lost roughly 8 percent of its 2020 wine grape crop to fears of smoke taint, according to an estimate this week by Jeff Bitter, president of Allied Grape Growers.

Bitter said that, combined with weather conditions that would have made a smaller crop anyway, California will probably have its smallest grape crush since 2011. That estimate comes with some good news for the wine industry, though not for consumers. California had been awash in bulk wine, so much so that new brands had been springing up like weeds to sell bulk wine for $15 a bottle in supermarkets.

“Covid helped the value end [wine brands] move faster through the grape excess,” said Steve Fredrick’s, president of Turrentine Brokerage. Consumers will see fewer anonymous $15 Napa Cabernets but, on the plus side, grape growers are already getting better prices for bulk wine from 2020 grapes than they did last year.

How Alcohol Got in the Way of Bacon

“Join us at Coyote Sonoma for a new pairing experience! A wine host will guide you through Zinfandels from multiple Wilson Artisan Wineries. Experience an array of seasoned Applewood smoked bacon, expertly paired with our Zinfandels by estate Chef Donna Parsons”. What could go wrong with that? 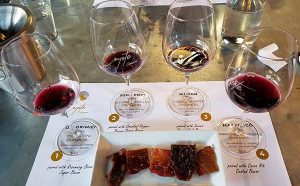 Well I’ll tell you Chef Parsons didn’t make any mistakes, the flavored bacons were delicious but whoever chose the five Wilson wine zinfandels certainly enjoyed the numbers fourteen and fifteen as that was the percentage of alcohol in all five of the wines that were matched with our bacon tasting experience and frankly ruined the tasting. Our wine host even acknowledged that she was surprised by the choice of the high alcohol wines.

Back some years ago Zinfandel winemakers in California thought that everybody wanted big high alcoholic content wines and bragged about how great they were. Too much alcohol in a wine is what makes that burning sensation in the back your throat and frankly that means the wine is totally out of balance with the fruit and the tannin.

The premise of the tasting was that zinfandels are supposed to be fruity and that fruit should have matched with the flavors of the bacon, unfortunately it was just the opposite, the high alcohol totally compromised the flavor of the bacon and made the whole exercise rather worthless and if I may mention this wasn’t a free event either.

Let me strongly suggest that you check the alcohol content on any red wine Cabernet, Zinfandel even Merlot and if  it’s more than 14.5% and is a young vintage I would stay away unless someone in the know has tried it. Alcohol will dissipate as wine ages but it won’t dissipate away in the forty-five minutes that you have the bottle open.

That’s my Whine and I could be wrong.

My corrected version of the Bacon Wrapped, Sausage Stuffed Pork Tenderloin recipe and a delicious version of scalloped potatoes, my Potato Mushroom Gratin are in fact right here, enjoy!