← Whose Notes Are They?
Two Simple Recipes With A Similar Cooking Style →

It was my good fortune to have recently attended two spectacular wine tasting events;  the Grands Crus de Bordeaux 2010 Vintage Tasting Tour stop in Chicago held at the Drake Hotel in the Grand Ballroom and the Tre Bicchieri Awards “Vini d’ Italia” tasting in the grand waiting room of Union Station, home of Metra and Amtrak. The Bordeaux tasting was so well attended that the day before they told lowly mopes like me that while the announced time was 12-6 I shouldn’t come until 3 – and it was still jammed. 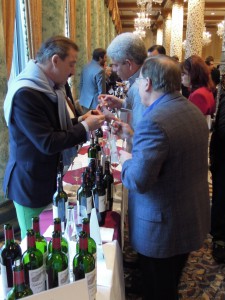 Note the scarf and turquoise slacks…oh the French

The Bordelais were on a five city tour that swept across the country, much like Napoléon, from New York to L.A. and points in-between, not as easy a task as you would think, answering the same inane questions from well, guys like me, “….and what percentage of Merlot is in the blend?” or “Don’t you think that high prices will hurt sales?” They smile smugly knowing that the newly rich Chinese and third world technology guys will buy whatever they produce at whatever price they want to charge, and it’s true.

Now speaking of what they produce, amazing is what I think but what about say the front page of the Wine Spectator magazine;

“Bordeaux 2010: A Classic Vintage – Monumental reds, the ’10s are well-balanced and built for long-term cellaring. They stand in stylistic contrast to the more opulent, forward and fruit-driven 2009s. White wines also excelled, in dry and sweet styles.”

OK I’m sticking with amazing. The wines are in terrific balance meaning that the fruit, alcohol and tannin are in fact relatively equal offering a wonderful aroma and mouth feel.

The event is a unique opportunity to taste wines from all regions and 113 chateaus were listed as being in the room but it was Margaux that really caught my attention. It is a west bank region hard by the river but that also means it has more Cabernet in the blend than Merlot. It was uncanny how the wines exhibited the same flavor profile, something I had never experienced before. It was explained to me “…that is was a great year in Margaux and that the wines are well balanced and will age for 20-30 years.” The best part is you don’t know the price when you taste the wine even though I must say I have a pretty good idea of what expensive tastes like, I loved a Chateau-Figeac from St. Emilion at $300 as well as an unclassified $20 La Tour De By from Medoc, sort of the Sonoma of France. Do yourself a favor and grab a case of De By.

Let’s move rooms – from the Drake to Union Station, very convenient for me as it’s the terminus of my Metra line from Galewood. 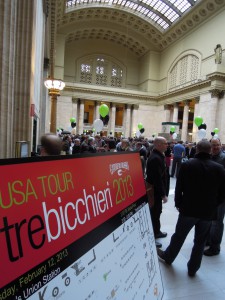 This is a beautiful location, look up into the ceiling the next time you’re in the station. Here again the room, which I believe is larger than the Drake, was fairly jammed and this was just a winners tasting – not the whole country.

Anyway the Tre Bicchieri award (three glasses) is a really big deal as a market validation of a winemaker’s skills. It gives the winery bragging rights in the competitive Italian wine market in addition to greater flexibility in pricing its wines. The award is judged by Gambero Rosso’s highly acclaimed annual guide, Italian Wines.

Italian wines at this level certainly come close to their French neighbors but not with the same length and breathe, they are much more compartmentalized by their own doing and not anywhere as well understood as the French. “40 years ago we let the French get by us in promoting their wines,” a statement made remorsefully to me by a wine maker from Tuscany. Let me say that they certainly have studied the Bordeaux’s ability to charge for their wines, I couldn’t fine one for less than $40 and most were in the upper range of $80 -150 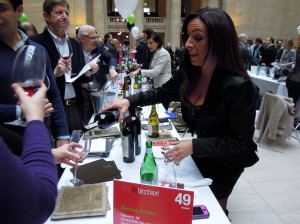 What a lovely …..wine

The geography doesn’t help much either as well nor the lack of transportation limiting access into some of these tiny regions. The whole country has only been a body politic for just over 100 years and getting around is still a bit of a challenge. As a result wines grown and developed in one valley never got to the next valley because they couldn’t. Food and culture developed or underdeveloped in the same way so mass marketing is still quite new in retrospect.

The severe local nature of Italian wines also doesn’t help with their labeling since it must state exactly where the wine comes from; OK Chianti from Tuscany isn’t much of a challenge but how about Cervaro della Sala (Castello della Salla), no idea even though the paren’s are supposed to help us.

All that said it was a great tasting experience but I’ve got to tell you… they’re going to going to have to fine a bigger hall.

That’s my whine and I could be wrong…