← So a Blaze Designer Decides to Make a Meatloaf
Of Cheese, Bubbles and Foothills →

Three Fresh and One Frozen

When McDonald’s rolled out its fresh beef quarter pounder I resisted the urge to rush right out to try one as I was waiting for a better reason and here it is –  this month’s Whine, the fast food burger rematch.

I’m not a fan of the big time fast food burger restaurants, the Mac, Wendy’s or Whopper as I’m willing to put out a few more dollars to enjoy a better burger at a one off local place (Big Guy’s and Scratch Kitchen in Forest Park and Super Burger and Phyllis’ Giant Burger in Santa Rosa) but I do fawn over Carl’s Jr. and it’s one of the reasons we moved here (smile) but I digress.

Loyal readers will recall that I did a casual burger review about three years ago with McDonald’s besting Wendy’s and Whopper mostly as a result of better burger construction and attention to detail. So now with fresh beef on the menu at three out of four of this year’s contestants I’ve taken another bite…and included a west coast favorite.

So we did our best in going apples to apples and chose a quarter pound burger sort of plain with only cheese and whatever sauce or condiments were included. We also ordered the standard issue or deluxe burger with the advertised toppings, lettuce, tomato, onion and pickle. Research tells me a great burger has an ideal ration of 50% meat to bun and toppings. Most fast food burgers hardly achieve a 30% beef to 70% toppings ratio but that’s how they keep prices under $5.00.

Now to the tasting results, least liked to the best. 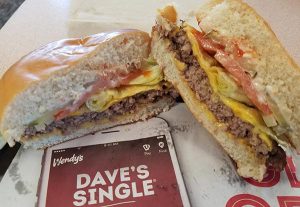 Wendy’s and Burger King flipped from our last outing as the Wendy’s burger was not an attractive combination.

“It’s our classic the way Dave intended! A juicy quarter pound of fresh, never frozen beef decorated with premium toppings all between a warm toasted bun”. Well my guess is whatever Dave may have intended and what we got are two very different things. 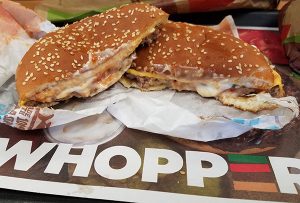 The taste of a backyard grill, flame-grilled beef, American cheese, tomato, onion, iceberg lettuce, and dill pickle, a dollop of mayo, a squirt of ketchup, and a sesame seed bun. There is absolutely nothing novel about the Whopper – and that’s what makes it so comforting a flavor to so many people.

Burger King claims to be the Home of the Whopper, but our sandwiches looked like they accidentally placed that home on top of the Whopper before it was delivered to us. Check the picture. 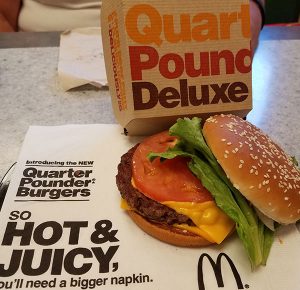 The tasting panel easily picked the Quarter Pounder as the best of the three national chains with the fresh beef making a real difference.

The brand has its own unique flavor profile that keeps it afloat (when you crave a real burger, McDonald’s won’t do, but on the other hand, when you crave McDonald’s, no other burger will either). The Special Sauce is of a thousand-island style that I can’t imagine enjoying it on a salad, but it’s a key flavor to the rest of the sandwich. 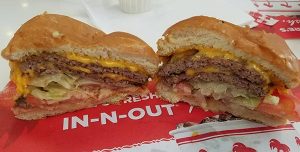 This is a second generation family run operation. They never open a location more than a day’s drive from their meat processing plant in Baldwin Park, California, just north of Anaheim. Recently they closed some 35 restaurants in Texas because they weren’t using the correct buns (what up Wendy’s). I have discovered that the chain and I have something in common; we both opened in 1948.

Looking at the picture what do you see that’s different, 1,000 points if you said, “the burgers on the top.” They do a bottom load, spread (mayo based thousand island), veggies and then the beef and cheese that melds the flavors together enveloping the burger, you mouth tastes everything differently. Try turning your next burger over before you take a bite and see if it tastes different and you’ll say my name out loud; “stupid jerk”.

The tasting panel agreed that is was the best burger we sampled and at a price range of a dollar less than the national chains, it’s easy to understand the long lines at the drive-up and waiting for seats inside.

In-N-Out faces some direct competition from The Habit Burger Grill based in Southern California. They feature the same style burger at the same price but also have a sandwich menu that includes tuna and tri-tip at the $10 range. They will have opened a store in Santa Rosa as you read this and the tasting panel will report soon. Hungry now?

This article also appears in print in the Forest Park Post (IL.)