Top Sonoma Caterer Make’s it Through Covid, Another Tough Wine Harvest and “Duking” it Out, Wendy’s “Refries” 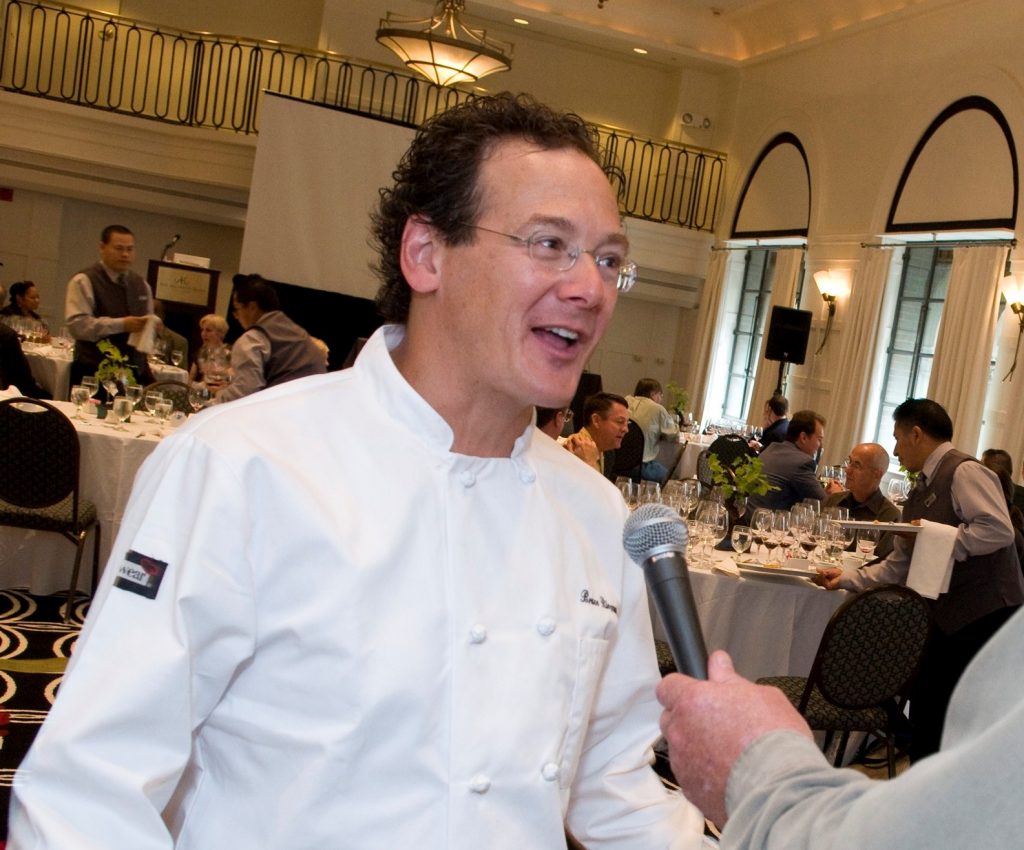 It was some 14 years ago or so when I was invited to attend a luncheon hosted by the Sonoma Vintners Association in Chicago at a boutique a hotel up on N. Michigan Ave. and where I became acquainted with Chef Bruce Riezenman. I took the opportunity to interview him on the spot when I discovered he was a noted food and wine consultant and in fact I featured him in that month’s Woody’s Whine – he still has the photo of that interview on his computer that he showed me when I interviewed him for this article.

In 1986 Chef Bruce and his partners were running a successful restaurant in Santa Rosa, California, called Prospect Park in the old Courthouse Square, when someone asked him to cater a wedding, he says he even had to go buy ash trays and candles but doesn’t remember what meal he cooked yet all went well and it was the beginning of what has become the number one wedding and events caterer in the NorCal area, Park Avenue Catering.

Prior to the restaurant being sold in 1993 Chef Bruce had designed food management and business software that is still being used to run Park Avenue to this day. I asked him to share the secret of his success. 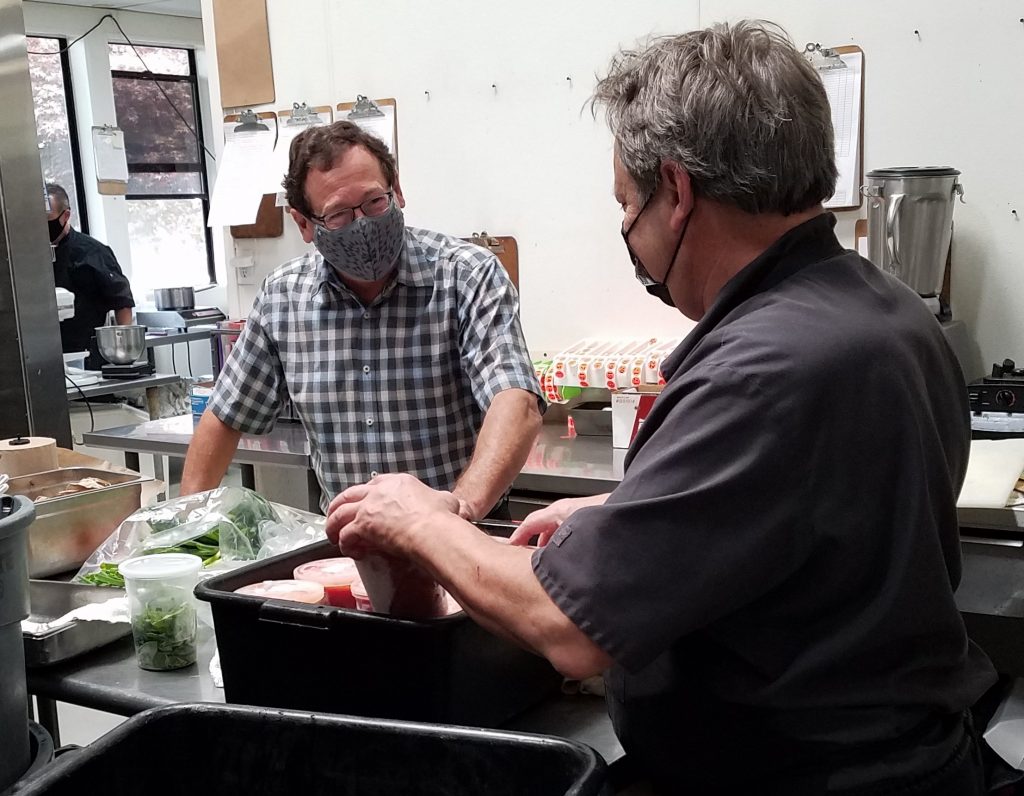 “It’s the longevity of our team”, he immediately replies, and then lists the names of his chefs and other staff members who have been with him for 10, 15 even 24 years. He continues, “It’s the attention to detail and we just don’t compromise. If something is missing or something’s not right we make a phone call immediately and we fix it, and really it’s our staff and that’s what makes us better. I’ve got people who work for me one day a week and have been doing it for 15 years, it’s that dedication and ownership that makes our corporate culture gold”.

I believe this is the appropriate place to remind everyone that I worked as a kitchen event staffer for Park Avenue during the very interesting summers of 2018 and 2019. Further I should relate that I was on the phone with Chef Bruce in March of 2020 explaining to him that my hip had gotten worse and that I wasn’t physically capable of fulfilling my duties. Our conversation was interrupted several times by urgent phone calls from clients canceling or postponing events as Covid was just coming to the forefront.

“When Covid hit in March of 2020 we had a full calendar booked through the spring and into the summer and then the calls started coming in, Chef related to me, “Cancel, cancel, cancel and then people with weddings booked for late spring and summer called wanting to postpone as people figured this was going to blow over, and of course it didn’t. The great thing was that 95% of our clients postponed for either later in the year or into the next year”.

“Of course we had to lay off staff”, he commented, “but you must realize that a majority of our staff are seasonal or on-call and that made it a little easier. “I immediately got on the phone and started to figure out what we could do to stay in business”.

He tells me that he and other staffers started reaching out to nonprofits and the hospitals and other places that were going to need food prepared for them and while it just wasn’t possible to give all the food away it was provided to them at a greatly reduced cost. Park Avenue provided thousands of meals to worthy causes such as Catholic Charities and others.

“We kept 28 people going full-time on our staff throughout the pandemic”, he proudly stated, “and as a result we are solid now as we come out of this because my core kitchen team and office staff never left, so when the restrictions were lifted on June 15 we weren’t starting from scratch”.

Bruce is from New York and trained at the Culinary Institute of America. He’s taught food and wine pairing throughout the United States and Europe He’s also traveled nationally for the Gallo folks and from his understanding, is the only caterer to have cooked at the James Beard house

three times, all of which added to his reputation as a chef who knows food and wine.

To stay in the top tier of catering services to the NorCal area Chef Bruce thought it important to look to the future and has in fact now become a co-owner of Park Avenue bringing on Chef Ari Weiswasser of the Glen Ellen Star restaurant in Glen Ellen, CA. as a partner.

“One of the purposes of the partnership was to institute a new culinary direction”, shares Chef Bruce, “I’d been running the business for 31 years and it was time for someone younger than I to come in and take the culinary reins and move forward in a more contemporary fashion, it’s new and it’s continually moving forward”. Two new catering services have been created to join the top tier Park Ave family. 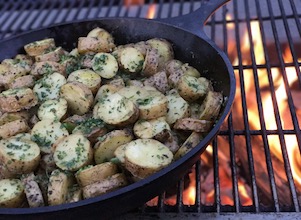 Stellar Catering offers a different style of cuisine’s based more on open fire cooking that produces food with a different taste and texture profile and is presented in a more casual style with staff in black T-shirts and blue jeans.

The Park 101 Mobile Kitchen is definitely the most casual and the best price point. It is a fully self-contained “show” kitchen offering 360 degree access, thereby becoming the heart of the party. Two or three chefs literally put on a show and can produce 250 meals in an hour, something no food truck can do. Park 101 uses minimal staff and all service items are compostable

Park Avenue Catering persevered through Covid and continues to expand and offer new tastes and approaches to its catering customers. I think Chef Bruce sums it up fairly well;

“We have this thing nailed with Park Avenue in that the quality that we put out, no matter what level of cooking, is equal to any restaurant or caterer out there”. 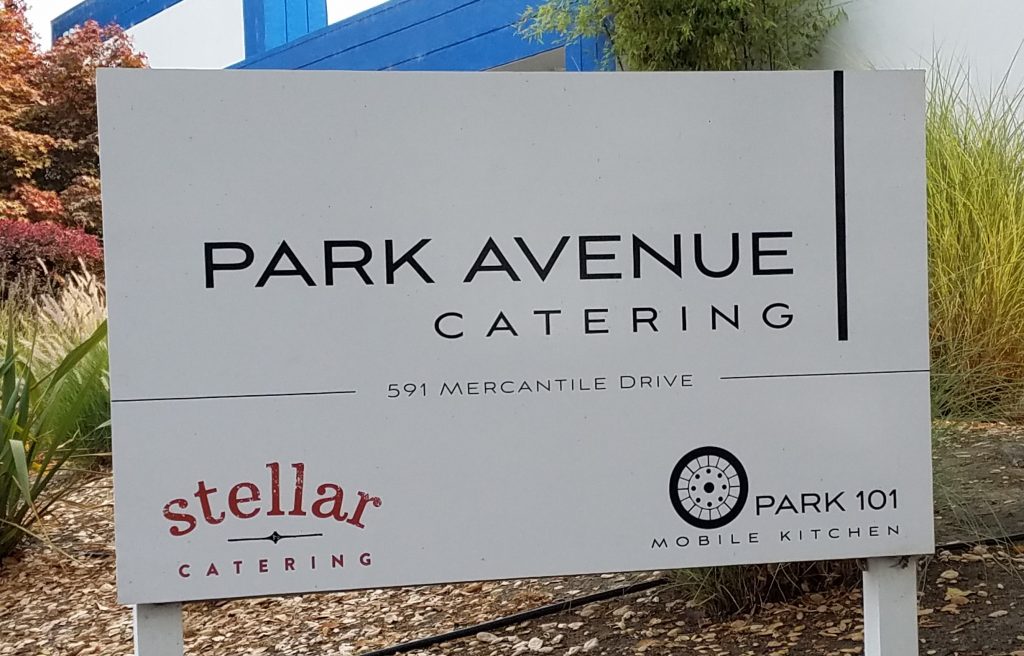 The first fruit ready for picking suggests that this second straight year of drought is resulting in a quicker-ripening and smaller-scale crop.

Vintners in Napa and Sonoma counties started bringing in fruit recently for sparkling wines. Grapes for these bubbly beverages are commonly picked at lower sugar levels, a few weeks before the first clusters for still wines come in. This early picking gives the wine business a preview of what’s to come for the bulk of a season’s forthcoming crop — that is, if harvest isn’t under unprecedented pressure like last year’s string of wildfires.

“As an example, our beautiful estate vineyard on Mount Veeder is showing less fruit, while our estate vineyards in Carneros and Yountville are close to an average year,” said Pauline Lhote, head winemaker for the Chandon Napa sparkling wine company.

“Mother nature always seems to keep us in balance somehow.” 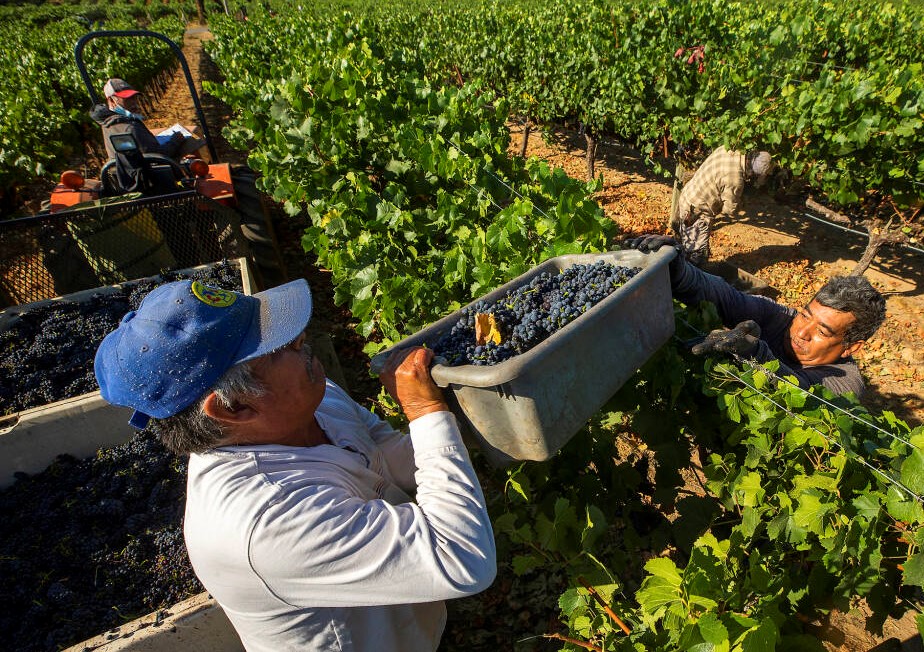 This year, many North Coast areas received a fraction of the average rainfall over the winter, and earlier warmer days spurred the beginning of the growing season earlier. Chandon and others moved to irrigate earlier in the season then supplement with more intense, less frequent watering as reservoir levels have dwindled over the summer. The smaller crop also has resulted from being even more selective than normal for only the best clusters to remain on the vine, a practice called “thinning” or “dropping.”

“What we lost in quantity in 2021 we’ll make up for with exceptional quality and flavor concentration,” Lhote said.

But there could be an upside to the smaller-sized fruit, particularly for red grapes, he said. “It could be a winemaker’s year, with a lighter crop and intense flavors and color with the drought,” he said.

Best to Duke it Out – the Mayo Battle Spreads On

“Battle” may seem just a bit extreme in describing the two Mayo camps but there is a parallel – the smaller Duke’s is from South Carolina and Hellmann’s originated in New York, see any historic comparisons here?

The name Hellmann’s dates back to 1913 when Richard Hellmann began mass-producing his famous deli mayo in New York.

In California, Postum Foods had introduced their own mayo known as Best Foods Mayonnaise. The two brands came under the same ownership in 1927 when Postum Foods bought the Hellmann’s brand, yet both products maintained their own recipes and brands until Unilever, a British company combined the products which now use the same recipe only with different names across the famous blue ribbon logo.

Duke’s meanwhile is the third-largest mayonnaise brand in the United States (behind Hellmann’s and Kraft), its popularity was at first largely limited to the South where its used in regional favorites such as tomato sandwiches, coleslaw, deviled eggs, pimento cheese, and potato salad. Duke’s mayonnaise uses only egg yolks and no added sugar where Hellman’s uses the whole egg. The tasting panel noticed that Duke’s flavor worked better with some flavors than others. 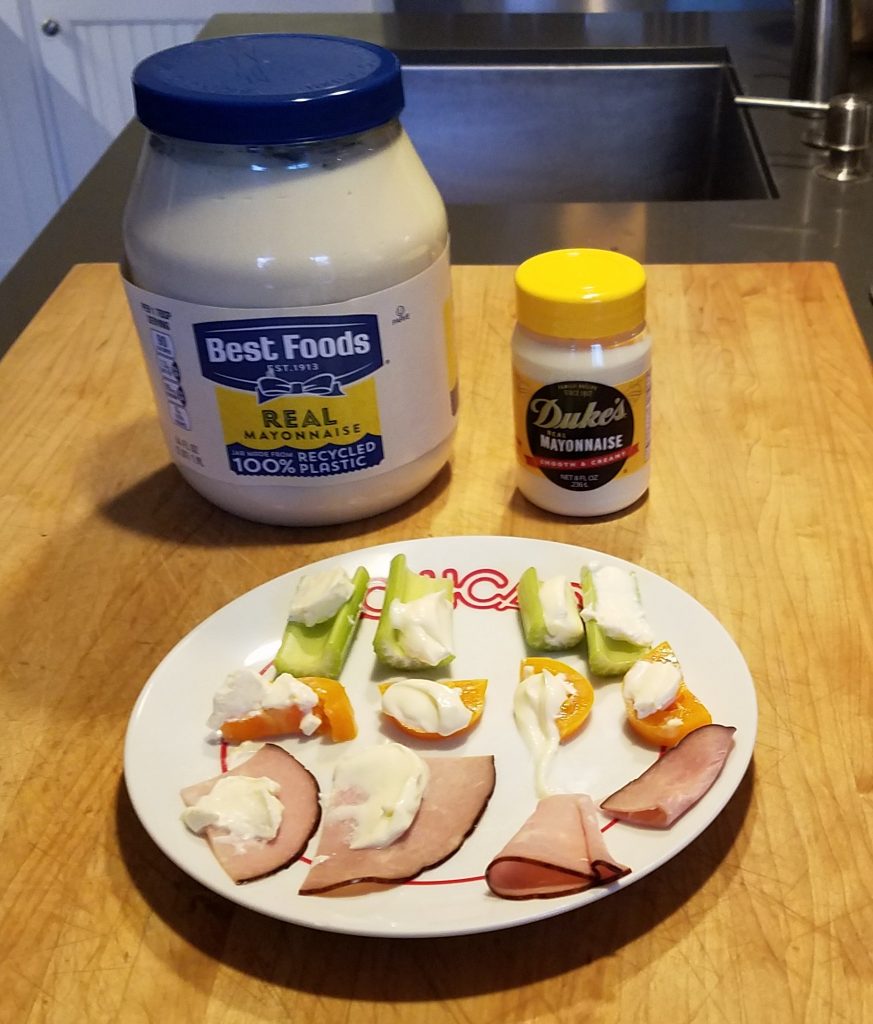 The tasting panel sampled Hellmann’s (Best Foods) and Duke’s Mayo as the result of an article I read where Duke’s loyalists were boosting it as the only brand to use, a claim I’ve heard before and I finally made the effort to sample via Amazon and I got the small jar in case I didn’t like it.

Both mayos were overpowered by the celery but the other panel member thought the Duke’s was creamier and I don’t disagree.

I thought the BF’s blended well with the tomato as the acid in the mayo and tomato worked well. The other member thought the Duke’s overpowered the tomato flavor.

The ham got a universal response. “That’s what I grew up with” from both members.

I feel the BF’s, my lifelong choice, is always good on anything but the other member suggested…”the depth and intensity of the Duke’s was part of its personality”.

If you were raised on Duke’s I can see that you’d be partial to it. As a final thought it seems that Duke’s is usually referenced in regards to sandwiches where it apparently shines. You may want to have both in the fridge.

The Wendy’s Co. has reformulated its French fries, a project last undertaken in 2010, and the new products are rolling out to some markets now and are expected to be completed in September. The new French fry was designed to retain heat and crispness for between 15 and 30 minutes to accommodate the brand’s growth in drive-thru, carry-out and other off-premises sales channels, said John Li, Wendy’s vice president of culinary innovation. The process of reformulating the skin-on fries was a months-long journey.

Of course we’ll be tasting so you don’t have too, but I put my foot down at sampling a Taco Bell Chicken sandwich where the question isn’t whether the chicken is any good but is it a taco or a sandwich?

A Few to Try

Here’s a list of wines edited from the Wine Spectator’s “Solid Values” reviews that I also know as good choices and you will find at better prices than what’s suggested.

My recipes for Rigatoni with Three Cheeses Whipping Cream and Ham and Chicken Parmesan Meatballs with Ricotta, Parm and Mozz are in fact right here, enjoy!