← What if You Had Nine Brands but Nobody Knew Your Name?
Wine by Land and Water →

What Does that Bottle Cost? Depends on Where You Live and Who Your Retailer Knows

Having lived most of my life in the highly competitive Chicago market I’ve always been able to find everything from tires to fresh mozzarella and of course wine and liquor in a store at a price that beats everyone else and I don’t mean Costco, but Binny’s and Famous Liquor’s come to mind.

Others of you who live far from wine shops (or even a Costco that in smaller markets probably is the cheaper retailer) so many of you buy your bottles at grocery stores where there is little help and the labels are cute, purchasing what are called national brands, nothing terrible, except to the price variations caused by the three distribution system, arcane state laws and frankly somewhat of an “anything goes” deal making process.

I was quite taken after a lunch conversation with an associate who had been in both the beer and wine industry on the distributor side and whose insight confirmed what I had suspected all along; when it comes to pricing in the liquor, beer and wine industry the only hard and fast rules are – that there aren’t any hard and fast rules. A recent column from WSJ wine writer Lette Teague also discovered that the buying and selling field is not that level.

Teague found that the wholesale (wine) prices may or may not be the actual prices a retailer or restaurateur pays. If retailers purchase multiple cases, distributors may give them discounts or even cash refunds. Prices and incentives are often published in wholesale catalogs but distributors are not obliged by all states to publish their prices, really. 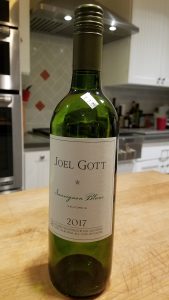 She chose a 2017 Joel Gott California Sauvignon Blanc that happens to be a Wine Spectator top 100 wine that is decent and lively, (we’ve been known to drink it) as a price test wine and found those prices to be all over the chart. The wine, priced at $12 on the Gott website, is available most anywhere with an annual production is 150,000 cases.

So to start, a bottle in Wayne, N.J. cost her $10.99—just 90 cents above frontline, according to the store owner who said, “In general our margins are exceedingly small on national brands.”

But that’s where things go sideways. During January, there was a wholesalers discount on the wine: for every three cases purchased by a retailer, they received a $15 check; for five cases, $65; for 10 cases, $210.

And what about pricing in the Golden state where the wine comes from, same stuff; according to a long-established Northern California wine merchant the Joel Gott Sauvignon’s case cost is $11.06/bottle. “If you know the secret handshake it goes down to $7.82,” said the retailer.

And what you ask does the Whine guy pay at his favorite Santa Rosa store – a warehousie place called the Bottle Barn – $7.99 marked down from $9.49. (I’d buy something else at that price)

In summation Ms. Teague suggests that, “Variations in pricing sometimes involve deal-making that’s not always transparent—or even legal” and that wine drinkers will have to search for nearby retailers who get the good deals—and pass them along to their customers – and now you know the rest of the story, sort of.

Constellation Brands Inc. announced a $1.7 billion deal Wednesday to sell about 30 wine and spirits brands and properties to E&J Gallo Winery, including the Clos du Bois winery in Geyserville and local brands such as Mark West and Ravenswood.

The deal comes as Constellation Brands looks to shed its portfolio of low-end wines and focus more on cannabis, while Gallo — already the largest wine company in the United States — concentrates on growing its market share. 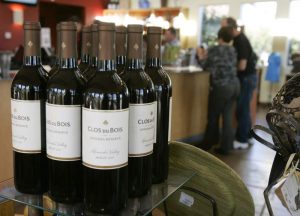 According a closely watched report by Silicon Valley Bank in the past year, sales of wines below $9 at retail dropped by 9 percent, “Millennials aren’t engaging with wine as hoped. They lack financial capacity, currently prefer premium spirits and craft beers, and have been slow getting into careers,” the report noted. Constellation’s premium wine lines, which are priced at more than $11 per bottle, are still performing well. Those brands include Kim Crawford, Meiomi and Prisoner. For privately held Gallo, the largest exporter of California wines, the deal could add to its scale.

My recipe for a tasty Mortadella and Fontina Calzone Pie is elsewhere on the site, enjoy