← “Mother Nature is a Winemaker” or How I learned to Love Wine from “Humid” and Hot Years
What Does that Bottle Cost? Depends on Where You Live and Who Your Retailer Knows →

What if You Had Nine Brands but Nobody Knew Your Name?

Oak Ridge Winery patriarch Rudy Maggio is the classic immigrant success story; family emigrated from Italy and eventually to Lodi; at age 11 he joined his father in the packaged fruit business; in 1980 began growing and selling wine grapes and some years later the story continues.

It was early in 2000 when Rudy’s three adult daughters, Lisa, Shelly (pictured with her son Roy) and Raquel decided they were tired of simply selling grapes and wanted to be wine makers so they encouraged him to purchase an available winemaking co-op. Again, the classic Lodi family story, where the newer generation suggests to the older generation that we can make more money selling bottles of wine than we can selling tons of grapes, there ought to be a C&W song.

Oak Ridge was a casual name for the new business, it stuck, strangely though only one of its nine brands – many that you know –  (QZV, Moss Roxx, Old Soul) uses the Oak Ridge name – that’s about to change in several ways.

“There’s lots of different brand names that don’t tieback to the winery as each wine has its own label and individual name with no mention of being part of the Oak Ridge family or it’s Lodi Heritage”, offers Paul Munoz, Director of Marketing. He tells me he has plans to develop a better back story for all of the wines clearly embracing their Lodi and family heritage.

Munoz recently joined Oak Ridge coming over from the Michael David winery with a focus on the rebranding. (Side Bar) Loyal readers will recall that we visited with David Phillips President and Co-Owner for our first Lodi story in January of 2018. I would be remiss to not let you know that Michael David recently sold the largest selling Zin brand in the world, Seven Deadly Zins for big bucks. And since we read it in the paper at breakfast the day of our visit, the winery has recently hired Adam Mettler from the Mettler winery as their new wine maker, we also visited Mettler on our first trip, but I digress.

The Maggio family is truly leading the way having set the rebranding process in motion, hiring a new wine maker to refine the wines as a bit more upscale, create new images and justifying an increased price point as a result. I should mention that the OZV and Moss Rocks are terrific examples of great Lodi Zinfandel at a very reasonable price; we bought cases of it at Famous Liquor’s in Forest Park, IL. in the day.

2020 will see a new marketing program and national advertising changes. It’s my guess that dad, the daughters and the great family heritage will be the heart and face of a new Oak Ridge back story.

Munoz gives all the credit to the family for recognizing the need to refresh and reorganize the brand, “I’m just here to be the behind the scenes enabler”.

North Coast wine grape growers hauled in a record $2 billion crop during the 2018 harvest as prices and yields climbed to unprecedented levels according to the annual California grape harvest report.

A record amount of 588,864 tons of grapes were picked — a 26% increase from 2017 — from vineyards in Sonoma, Napa, Mendocino and Lake counties. The average price of grapes from the four-county region also set a record of $3,427 per ton, a 0.4% increase from the previous year. The average price per ton in Napa County was $5,571 per ton last year, while Sonoma County reached $2,818 per ton. See what a good rain season will do for you. 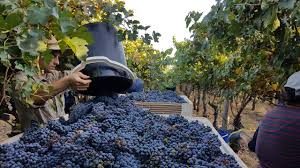 The most expensive grape variety, cabernet sauvignon from Napa County, increased 5% to $7,854 per ton, which isn’t surprising given its continued popularity among wine drinkers in the premium and luxury market. But the yield was up 34% from 2017 to an overall total of 89,097 tons. That roughly equals about 1.5 million cases that were produced last year compared to 2017 for the varietal, said Brain Clements, vice president at Turrentine Brokerage in San Rafael.

That surplus will bring additional pressure on the sales and marketing teams at local wineries to find ways to ship the additional wine in the midst of flattening sales in the overall wine market. Wine shipments in the United States only increased 1.2% last year. You kids aren’t drinking as fast as you used to.

“You have additional cases to sell that you weren’t thinking to sell,” said Clements, who added some wineries may opt to form a new brand or others may seek to offload it to the bulk market. “It’s going to be a challenge.” Good news for the wine drinker, better blends and stable prices.

The big overall crop in the North Coast likely will have some growers on edge as they renegotiate their contracts with wineries, which are faced with excess supply as well as a tightening consumer market, analysts said. They are likely to encounter wineries that will be reticent at any attempt to raise prices. Yeah!

We’ll be tasting these and other wines from the judging in the near future and of course I’ll share my thoughts with you.

Daryl Groom, chief judge chose 10 wines representing good value across the range of major varieties entered in the contest. Here is what he came up with, from whites to reds:

The non-vintage blush sparkler gets its rosy color and berry flavors from leaving a small portion of the grapes in contact with the skins for up to 24 hours. The wine is 92% pinot and 8% chardonnay.

Grapes were sourced from three vineyards, all over 70 years old, in the Alexander, Russian River and Sonoma valleys.

“The Russian River vineyard definitely brings in more red fruit, more acidity to the wine;” according to wine maker Katie Madigan “The Alexander Valley brings in that ripe, darker fruit character. And the Sonoma Valley plot brings in more of that spicy, pepper-based zinfandel that is in the background.”

Although the St. Francis Old Vines Zinfandel Tres Viejos is at its peak now, Madison said she expects it to stay strong through 2025. I’ll never know.

My recipe for a tasty mushroom pate with cream cheese, sherry and parsley is elsewhere on the site, enjoy!