← Notes Regarding a Cheese Exchange, A Wine Tasting and Hand Sanitizer: You’ll Get It
So What To Do When a PR Lady Offers to Send Three Bottles of Wine? →

What Started Out Big is Better Small

So with all the big wine tasting events around here canceled due to the Covid thing I’ve been working to doing a more food centric feature article for the Whine. I see the Shake Shack burger chain mentioned in a web article regards receiving some sort of an award and their mention inspires me not make their burger but to make their chicken sandwich with the intention of incorporating the sandwich into my catering offerings as a smaller slider size.

As you may know Shake Shack started out as a hot dog cart in Manhattan and soon became brick-and-mortar locations and now there are at least 150 of them. They have very high standards; the burgers are 100% Angus beef and the chicken is real white-meat that’s fresh, never frozen and oh, they source their hot dogs from – Vienna Beef in Chicago – how could that be wrong.

Strangely enough the secret to their success is not really a secret. The recipes for most of their food items are readily available on the Internet and in fact they’ve even published a recipe cookbook. To prove my point I find the identical recipe on several different food and cooking websites.

While most versions of the recipe called for a three or four ounce piece of chicken I felt that a 2 ounce portion would be best for the smaller slider bun, but I had no idea that basic science would get in the way. 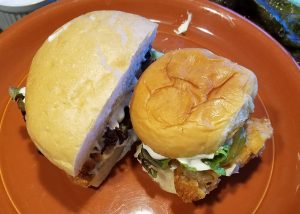 Buttermilk, an acid, is a key component of not only the marinade but also of an herb mayonnaise that the chicken is served with. The other key component is baking powder, a base that is mixed into the flour coating that the chicken is dipped in before frying. And when these two items are combined and then heated to create a tasty coating around the chicken it causes a chemical reaction that almost doubles the size of the coating – very clever if you’re in the restaurant business selling people a 3 ounce piece of chicken which looks like six and is yet quite delicious. Unfortunately for my purposes it really didn’t work as it’s just too big for a small bun.

None the less we enjoyed a tasty meal and I learned a little “Mr. Food Science” in the process but it still left me with trying to figure out portioning, dealing with a long cooking time and finding the right size bun – I really didn’t see this as a useful product –  until I started to put it away.

I took piece of too big chicken and cut it in half lengthwise and then cut several small pieces until my kitchen scale showed I had a one ounce bite. I grab some of my bamboo skewers and a four ounce plastic cup, my classic serving items, put a dab of the mayo in the bottom, a piece of chicken on top with a pickle and a skewer and what you know, my very own Shake Shack chicken bite. It will be easier to process; the chicken smaller pieces, easier to coat with the flour mixture and faster to cook, no bun needed. 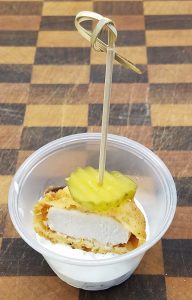 The chicken bites have been a success with both the home and away tasting panel members. So if you want to tasty sandwich don’t hesitate to try this recipe but sometimes smaller can be better.

Sometimes it Just Makes Sense to Get Bigger 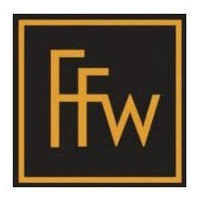 Foley Family Wines announced it is acquiring Ferrari-Carano Vineyards and Winery and as a result will become the third largest vineyard owner in Sonoma County after E. & J. Gallo and Jackson Family Wines with nearly 2,400 vineyard acres.

Bill Foley head of Foley Wines offered, “The deal allows me to shift production around as I’m out of space at Foley: I was going to have to spend tens of millions of dollars to reinvigorate the Sebastiani and Langtree winery because they’re aging production facilities. I don’t have to do that now. I can just shift production and move my Sauvignon Blanc production over to Ferrari-Carano along with the Chalk Hill Sonoma Coast Brand”. Foley also intends to bring the Ferrari-Carano Fume Blanc and Chardonnay back to a Sonoma designation from a North Coast appellation (thought to be more generic) because,  “We’ve got vineyards in Sonoma that take care of the supply issue,  little things like that are neat”. He also intends to expand Ferrari-Carano’s PreVail Alexander Valley facility from 80,000 to 500,000 cases. “It’s a gigantic facility with 80,000 square feet of caves if you can believe it. It’s underutilized now but I can use it”, Foley commented. 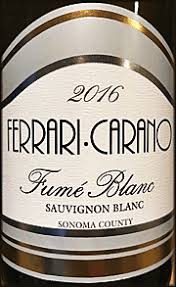 “I think it is important to the Carano family that they sold to a family business as opposed to a big conglomerate or to a big wine company”, Foley stated. “I told them that every day I try to improve what I’m doing and I’ll do the same for Ferrari-Carano. I’ll try to make it better and I will preserve the brand”.

On a personal note I’m told that my acquaintance Matt Ditka (yes that Ditka) whom I had worked with for several years at the Chicago Gourmet event and at other tastings prior to our move, will unfortunately not be retained as the Midwest Distribution Manager for Ferrari-Carano. 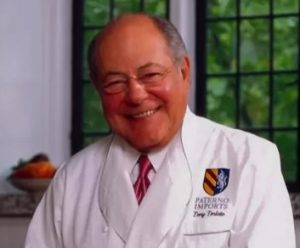 Whether you’re a big Pinot Grigio drinker or only had a glass once, you owe the experience to Anthony Terlato, wine importer, distributor, savvy marketer and winery owner who passed away June 28 at age 86, probably best remembered as the man who introduced Pinot Grigio to America — he was much more.

Terlato’s career began in 1955 at Leading Liquor Marts, his father’s wine and spirits store on the North Side of Chicago. He was passionate about quality and traveled to Italy multiple times each year to sample wines, and on one of those trips, he experienced Pinot Grigo, a varietal then unheard of in the United States. Terlato began importing and marketing Pinot Grigo — most notably, Santa Margherita, which eventually sold more than a half-million cases per year to the U.S. alone — turning the wine into the most popular imported varietal in the country. 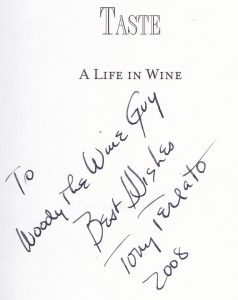 Bill Daley, the Chicago Tribune’s former food and wine reporter, remembered Terlato’s openness with his knowledge. “I appreciated his willingness to share insights into wine and the wine business. As I wrote in a 2008 piece about his autobiography, ‘some of Terlato’s business decisions have changed forever what we drink and why.’ He was famously called ‘The Father of Pinot Grigio’ for a reason.”

I met Tony only once, but that one time was enough to know that he was quite something and he was even nice enough to sign my book.

The Wine Business Institute at Sonoma State University recently issued a report estimating that the California economy will experience a loss of nearly $10 billion from a decline in revenues to the state’s vintners and growers because of COVID-19. California’s wine industry is projected to lose $4.22 billion in revenues in 2020, based on significant decreases in on premise, tasting room, and direct sales.

“The California wine industry’s loss will have a ripple effect throughout the California economy because of the strong link to tourism, restaurants and related business sectors. We anticipate a challenging recovery period ahead,” said Ray Johnson, executive director of the Wine Business Institute at Sonoma State University.

Who Was Last is Now First 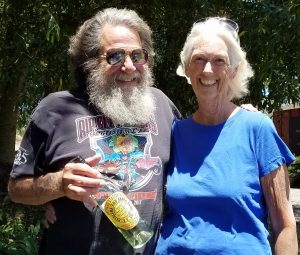 Loyal readers will recall that April’s Woody’s Whine feature story, “Our Last Wine Maker” resulted from the pandemic shutting down wine tastings, among other things.

Well wouldn’t you just know it that by sheer coincidence the first winery we were able to visit and pickup our quarterly shipment from was, you guessed it, Moondance Cellars and winemakers and proprietaries, David and Priscilla Cohen. It was great fun chatting and sampling at a picnic table outside with a lovely breeze and no masks – great people and great wine.

My take on recipes for the Shake Shack fried chicken sandwich and a Creamy Baked Mac and Cheese Pasta are elsewhere on the site, enjoy!