Wine, Wine Everywhere – But Not So Great Chicken Sandwich News

Yes I know the title says there’s too much wine and the picture is McDonald’s Chicken Sandwiches but… I’ve had “boots on the ground in Knoxville TN where they were testing the new sandwiches and I couldn’t pass up the great stock photo.

So about too much wine…

You might want to pour yourself a glass of wine (cause there’s plenty). Silicon Valley Bank’s annual State of the Wine Industry report is out, and it’s the bleakest one in the report’s 19-year history.

“I think last year’s report was worse, but the industry didn’t believe the research,” Rob McMillan, executive vice-president of Silicon Valley Bank’s wine division, told Wine-Searcher. “The industry is getting the message now.” 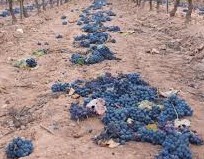 Vineyards planted in California during boom times are producing so many grapes that there’s a glut. Grapes went unharvested (left on the vine or cut and dropped) last autumn in regions all over California, and Washington as well.

“Millennials aren’t engaging with wine as hoped. They lack financial capacity, having been slow to get into their careers after the financial crisis. They have a current preference for premium spirits and craft beers,” according to McMillan.

The slowing sales were exacerbated by the record 2018 California wine grape harvest and somewhat smaller 2019 crush, a glut is a glut no matter what you call it.

“Today, the supply chain is stuffed”. This oversupply, coupled with eroding consumer demand, can only lead to discounting of finished wine, (yea!) bulk wine and grapes, good news for you wine lovers but challenging for producers and growers. 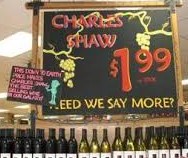 A surplus market in 2001 propelled Fred Franzia to buy hundreds of thousands of gallons of Napa Valley cabernet sauvignon in bulk at a big discount, and the result was the sales phenomenon known originally as “Two Buck Chuck,” after its bottle price.

I don’t think you’ll see any new “Chuck” brands but you’ll probably start seeing higher end bottles say in the $35 to $55 range being sold as “shiners”, bottled and sold without a label that will come to market as a private label at a special discount or as a Costco brand, but instead of being labeled as generic Sonoma cab or pinot noir, it will be more specifically labeled for example, as a Russian River Valley pinot.

I’ve been suggesting this oversupply in recent Whines for the past several months but I had no idea that the situation was quite this serious and apparently the people who are supposed to know didn’t either.

I’ve tasted some recently released 2018 whites and they are noticeable for their fruit flavor and balance. It was a decent weather year and it shows in the harvest, can’t wait to get some reds in my glass.

Be sure to ask your local wine dealer to keep you in mind when the store gets “special bottles” of California or Washington wines at discounted prices.

Of Chicken sandwiches in Knoxville TN

I am fortunate to have had competent testers in Knoxville and only just realized after I read the PR blurb when editing that I could have had someone in the Houston area also, missed opportunity.

For the record both members of the tasting panel are female and at least one of their significant others loves the Popeye’s Chicken sandwich that I reviewed here several months ago. 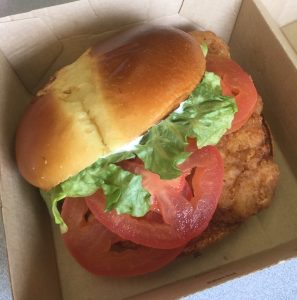 “Don’t care for the sweeter bun type.” (I find that comment interesting as it’s supposed to be a potato roll which would not necessarily be sweet but it could be the southern market). “The breading on the chicken was crispy and not overly cooked, pretty good but too much mayo and no pickle”. Not sure if the pickle gets deleted on the deluxe that includes L&T. “This is not a sandwich I would specifically go out of my way for, but it’s OK. I like the Chick-fil-A version of this sandwich better.”

A “McDonald’s Franchisee Survey” by Kalinowski Equity Research released on January 27, 2020 – as I’m editing, states  that 89% of franchisees responding said Chick-fil-A was the brand’s biggest rival while another 11% named Popeye’s. Get this – none of the respondents listed any burger chains as a threat.

One operator even went so far as to state, “We should shamelessly copy Popeye’s excellent sandwich.” 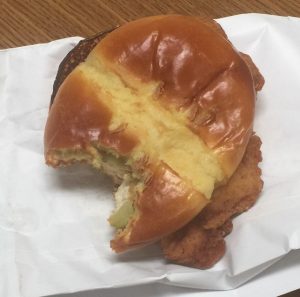 The Knoxville tasting panel also tried the regular chicken sandwich
“Just awful. The bun had a plastic feel in mouth. There was no mayo or
dressing. The chicken was rubbery. I threw the sandwich away after
the first bite.”

“Knoxville we have a problem” (get it)

There’s been no news from Mickey D’s about a national release or modifications to the sandwich – doesn’t look good either way from Knoxville’s point of view. Maybe they can drown their sorrows in wine…

That my Whine and I could be wrong…

My recipe for a tasty Mushroom Tart with Three Cheeses that drew comment on Facebook, is elsewhere on the site, enjoy!