← Tasting Libraries Along the Wine Road, Winner, Winner Chicken Yes! and Fish Really Not So Good, Dinner, Gallo Heads East and Yes There’s More
Gallo Gets Really Big, New Spicy Chicken, a Moment in Time for Wine at the Governor’s Mansion and Matching Wine with Chocolate →

Winner, Winner Fish and Chicken Dinner – HMMM, Not So Much, The Birth of Bombastic Butter Bombs, Some Reasonable Reds

It amazes me that two fast food companies with all of the same equipment and product in front of them can’t just out right copy a process and make the product their own; in this case Popeyes, purveyor of the number one fried chicken sandwich in the world can’t it seems, fry a piece of fish and put it on a bun that anyone would want to eat. McDonald’s who’s been frying stuff for years can’t seem to figure out how to cook a piece of chicken and construct a decent sandwich from it.

I hope you’ll find the following information entertaining as well as helpful. 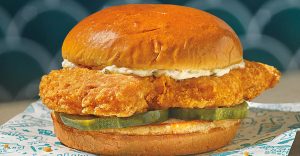 Popeyes Louisiana Kitchen introduced its new Cajun Flounder Sandwich in February with a consumer insurance offer; if you order the fish sandwich and don’t like it you can replace it with a chicken sandwich for free if you’ve purchased “sandwich insurance’ for 15 cents at the Popeyes app on launch day, so not quite free.

The Cajun Flounder Sandwich features a fried filet served atop a toasted brioche bun with pickles and Popeyes’ legacy tartar sauce. The limited-time-offer fish sandwich will be available nationwide for $4.49

“After seeing the response to our chicken sandwich in 2019, we are excited to deliver yet another delicious sandwich to our fans that is sure to reset industry standards,” said Sami Siddiqui, president for Popeyes Louisiana Kitchen in the Americas.

With indoor dining still restricted in our part of California you’ll notice that the 15 minute car ride in a sealed foil bag was not helpful to the look of the brioche bun or the sandwich resulting in somewhat of a less appealing sandwich compared to the marketing picture.

“Boy that’s a spicy flavor”, said both members of the tasting panel (even the member who is not noted for a love of spicy) remarked upon taking their first bites and we agreed that the spiciness overtakes the flavor of the sandwich. Neither of us could recall if the chicken sandwich we sampled some months ago exhibited this the same spice level that appears to be carried in the way-too-thick battering of the fish. (I think not)

We found both the pickles and the sauce on the bottom bun unlike the marketing picture which shows a generous portion of ”legacy tartar sauce” on top and large pickle slices protruding from the bottom. We were lucky to find a smattering of sauce, certainly not a legacy, with no flavor and three small pickle pieces, yes pieces, stuck together on the bottom bun. The bun purportedly is the same that is used for the chicken sandwich but it became soggy in the foil lined packaging.

For the fishe’s sake it was a nice size and did fill the bun but the breading that we discerned to contain the spicy flavoring, was quite thick and not at all like the batter dipped chicken breast that we have experienced. There truly was a piece of fish under the breading but nowhere the size that is portrayed in the marketing photo.

We both agreed that we might try the fish sandwich again when we could do it freshly prepared at a restaurant location, but we then both questioned why, cause if you’re in the same place as the chicken sandwich would you even order fish?

I should have bought the insurance. 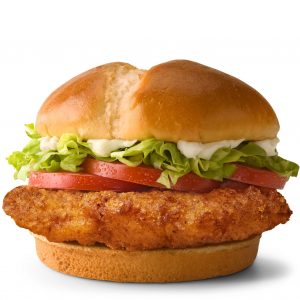 “We believe it’s going to jumpstart our chicken journey, build our chicken credentials and get people to start looking at us differently. That’s how we will make sure we become known for our chicken.” Joe Erlinger, president of McDonald’s USA.

The Deluxe Chicken Sandwich is the same fillet and bun but simply goes a bit heavier with the toppings: shredded lettuce, Roma tomatoes and mayo. $4.99

The Spicy Chicken Sandwich features the same fillet but cranks the heat level by adding a Spicy Pepper Sauce and crinkle-cut pickles on a toasted potato roll. $4.39

Well let’s see if the tasting panel shares their optimism.

Initial thoughts from the tasting panel noted that the buns and sandwiches held up to travel better than the fish sandwich did, in fact McDonald’s also put the crispy and spicy sandwiches in foil bags but packaged the deluxe, with the lettuce and tomatoes, in a cardboard container so as not to steam them.

Our first thoughts when sampling the crispy sandwich were that it was a really good piece of chicken, “I still get crispy even after the travel time.” The sandwich came with several little pickle pieces that add nothing to its flavor, no sauce or topping, we bet that changes – smoky paprika anyone… 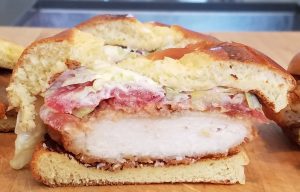 The deluxe sandwich was sloppy in its construction but still had the good chicken flavor yet nothing better than ordinary as to overall taste as the tomatoes, lettuce and mayo were not assembled well and were not complementary.

The tasting panel agreed that the spicy chicken flavor develops nicely in your mouth yet is not too spicy and does not linger forever – nice job.

The panel agreed that the potato rolls are tasty and hold up well to travel; they were also well toasted to absorb sauces and juices from vegetables. Brioche buns are trendy but they can be a bit too much bread on certain kinds of sandwiches and don’t travel well.

The pickles on both of the sandwiches were small and again in pieces, there was no real pickle flavor and they added nothing to the sandwich. All three versions could have used a touch of salt, possibly in the breading.

It was a nice thick cut of chicken; the breading held up well and is fairly tasty; the panel agreed that while it was a nice piece of chicken it’s too bad it wasn’t presented very well.

The poor assembly of our sandwiches represents either poor training or poor management where the chicken meets the bun and really determines the final flavor and taste of the sandwich as well as customer satisfaction and the perception of the value invested, needs a lot of work.

The panel agreed that we’d order the Spicy again simply because it had flavor and the Deluxe if we could eat it on site without travel involved. The sandwiches are overall better than before but still a ways to go and still not close to Popeyes in style or flavor.

Here’s another thought from a review in the Chicago Tribune:

“While they are an enormous improvement, the sandwiches still don’t quite measure up to the crackly crunch of KFC’s new option, or the complex spice profile of Popeyes’ popular chicken sandwich. McDonald’s might not have hit the home run it was hoping for, but at least it’s playing the same game now”.

Note: the KFC chicken sandwich has not received the same pub or promotion as others but loyal readers trust me there’ll be a head-to-head with KFC and Popeyes in the next Whine.

I have never been a fan of the KJ Chardonnay, always thought it tasted sweet rather than rich or creamy, but there are millions of people who can’t get enough of it and here’s a brief story of how it started. Note: I did not write this piece but can’t remember where I found and you’ll see I’ve added some of my own thoughts.

In 1982, an accident of sorts would forever change California Chardonnay. At Kendall Jackson, a stuck fermentation (wine going thru a natural process) left the wine with some residual sugar. When combined with fermentation in new oak as well as malolactic fermentation, a blockbuster was born. (Groan) This runaway success story resulted in a chain reaction of financially rewarding, copycat winemaking across the state. 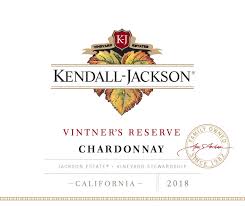 Chardonnay is easily marred (screwed up) due to its neutrality, making it a useful tool for insight into consumer inclinations and perceptions. If you’re not a fan of big, rich wines, it doesn’t necessarily follow that you don’t like oak or malolactic fermentation. Bad Chardonnay is usually the result of grapes that have neither the stuffing nor the structure to stand up to and work well with their treatment in the cellar.

In layman’s terms; no matter how much fancy stuff you do to the wine if it’s not good wine to start with, it won’t make any difference

The Wine Enthusiast review of the Kendall Jackson vintners reserve California Chardonnay 90 points. Try it if you must

Fruity, smooth and slightly spicy, this medium-bodied wine is a crowd-pleaser. Still one of the best Chardonnays with the broad California label designation (mean the grapes can come from anywhere in California), it offers delicious peach, ginger and vanilla flavors (barrel aging), and a good balance between ripeness and crispness. $15 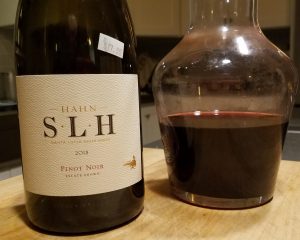 This is a very pleasant, every day Pinot Noir at a very nice price for my salmon recipe

We were recently at St. Francis in Kenwood and found their 2017 Sonoma County Cabernet very pleasant with nice dark fruit. < $20

A real bargain is the 2018 Oberon Napa County Cabernet. Sourced from a number of Napa vineyards it’s made by a high end winemaker who’s doing us all a nice favor at $20. 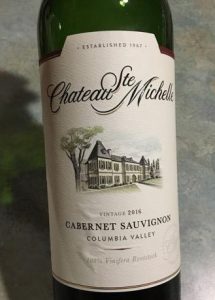 I think we all have a tendency to overlook great Washington state wines. Look for these two from Château St. Michelle;

My recipes for a Simple and Delicious Pan Seared Salmon and a Quick Shrimp Salad Sandwich with Avocado are in fact right here, enjoy!