← Help Given Gladly
Close to The Edge →

Perfect Pie is Worth A Bit of Work

You are either a cook or a baker and never the twain shall meet. Cooking allows you leeway in adding or taking away ingredients and to alter on-the-fly the actual time you cook things with the ability to add flavors as you go, a lot of freelance. Baking on the other hand is a rather precise process, you must use cups and teaspoons and you must level the tops of measuring devices to gain the precise amount of yeast, sugar or whatever, tedious at best if you ask me. Yet every now and then I concede that baking something isn’t a bad idea, usually a bread or biscuit item, so this is how I came to make pizza dough and be happy about it. 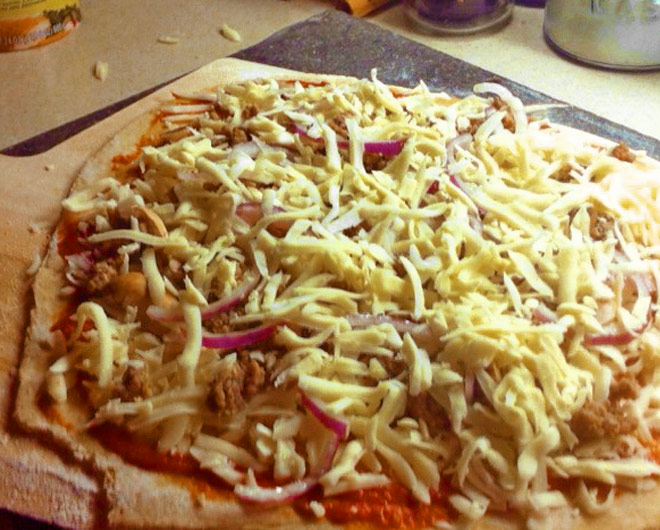 I am guilty of getting the sudden inspiration on a Saturday afternoon or Sunday evening to make a pizza at home since frankly we really can’t find a good pizza joint in this area, really. The problem is that to make a pizza you need to make the crust as the other ingredients are available everywhere and ready to go. Yet making a crust takes time, you must let the dough rise and rise and then rise again, time consuming. So what about frozen dough you ask and thanks, well it’s great except it’s frozen and it needs to thaw and rise also.

As any of you follow my “Whines” know I do a fair amount of business at the Caputo Cheese Market on 15th Ave. in Melrose Park, a great place to buy things Italian and as you might imagine, frozen dough. Of course frozen dough needs to defrost and frankly it should be allowed to rise in the refrigerator either overnight or out on the counter for a couple of hours before you actually bake it but I’ll let you in on a little secret – it’s pretty forgiving and I’ve been successful microwaving it to defrost and then letting it rise for an hour so.

The first reference to pizza appears in 16th century Naples where a “Galette” or flatbread was first referred to as a pizza, sold in the street and known as a dish for poor people. Then came the idea of covering the flat pastry with cheese, meat, vegetables and seasoning so that seemed to be moving in the right direction.

But the real innovation that led to pizza was the discovery and then use of tomatoes as a topping. This happened when some Italian explorer guys brought tomatoes back from the Americas in the late 18th century and those same poor people of Naples began to add tomato to their yeast-based flat bread and so gentle reader, the pizza as we sort of know it, began. My research also tells me that such other notable food items as meatballs and fresh mozzarella come from the same Campania region as pizza.

A pizza ultimately succeeds or fails on the quality of its crust and the kind of flour you choose makes a big difference. I made two dough recipes one using all white “00” flour, it’s all the rage of the Neapolitan pizza guys and their 800° wood fired ovens. And one with half whole-wheat flour that makes for a flavorful crust with a bit more bite but not that much of a flavor difference. The secret is making sure to roll out whatever dough quite thinly so that in fact it will cook quickly and crisp up nicely. 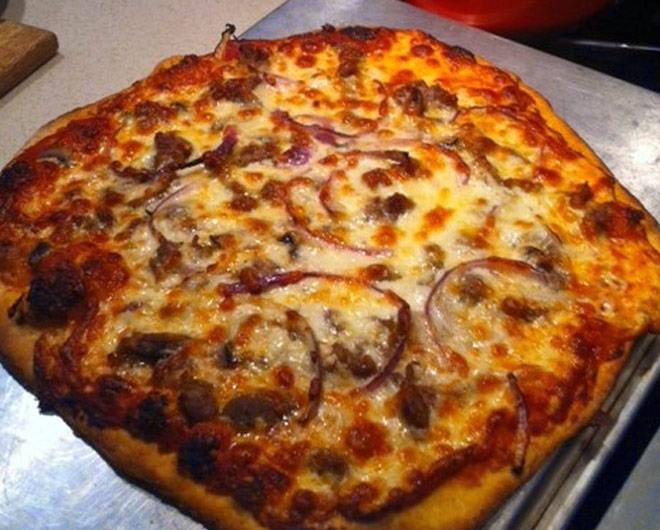 As to taste scoring, I submitted some small bites to three independent judging firms: The ladies at the Exquisite Smiles Dental office in Oak Park didn’t like the mushrooms and picked them off and were split on the crusts; the boys at Dressel’s Hardware liked the whole wheat and the group at Westgate Florist was again split on the crusts.

Here’s some other recipe insights; I use a canned pizza sauce, from Caputo that I like to add some dried Italian spices to or maybe just oregano and a little roasted garlic. I make a cheese blend of equal parts of whole milk and skim milk mozzarella and then half parts of Provolone and Asiago, grated by hand so they are fresh. I buy bulk Italian sausage and gently precook it so as to eliminate the grease. I slice fresh mushrooms and neither toss them with olive oil and a little lemon juice and salt and pepper or to add another layer of flavor I will sauté them in olive oil and butter without the lemon juice and I like to toss a few rings of sliced red onion over everything and then top with cheese, everything in moderation, so the flavors will meld well.

Oh and what to drink with your thin crust, tomato sauce, lots of mozzarella cheese, topped with plenty of sausage, mushrooms? Wines that will work well will need lower acid levels, since the tomato sauce will contribute plenty of acid on its own, and should carry fruit very forward to conquer the sugar/acid combination of the tomato and yet blend with the cheese and mushroom. We can look for an every day Chianti for example or yes even a Zinfandel, but something less than 15%.

Ready for Some Amazing Pizza Recipes?!