← He’s Tasted 250,000 Wines In 40 Years, Gallo Grows Yet Again, Panera Bread Joins the Chicken Sandwich Battle – Sort of, Kendell-Jackson Goes to the Races, Please Consider for Your next Visit
We Taste A Top Ten Value Wine, Wine Drinkers Aren’t Getting Any Younger, The Cost of Wine Hasn’t Gone up But The Price of The Bottle Has, Sort of, Coca-Cola Remakes Fresca Into An Adult Beverage & More →

Reports on Thieving, Tendering, Millennials, Illinois Wine Wants More Space, My Shipments Bigger than Yours and of Course More

So the tasting panel took another mouthful of the fast food chicken conflict when we sampled chicken tender offerings from four of the chicken sandwich competitors that we tried some months ago. We thiefed our way through a barrel tasting in Hopland up in Mendocino county and there are more details on how wine is not the choice of millennials, Illinois wine wants more space and just who’s shipping the most alcoholic products to who, enjoy.

Not much news in the fast food chicken sandwich realm these days so I thought I’d follow up on my thought to review the chicken strips or tenders that are cousins to the sandwiches we tasted some months ago. In some cases nothing is changed and in others it should.

I note that the tasting panel sampled all four of these products as carry out due to let’s say, scheduling issues,  yet I was pleasantly surprised that most of the products still held up pretty well to reheating.

The KFC chicken sandwich came in a strong second to the Popeyes chicken sandwich when we tasted some months ago but their tenders didn’t appear to have been breaded or handled in the same way as is the sandwich filet – I believe this is a local restaurant production problem or mistake. 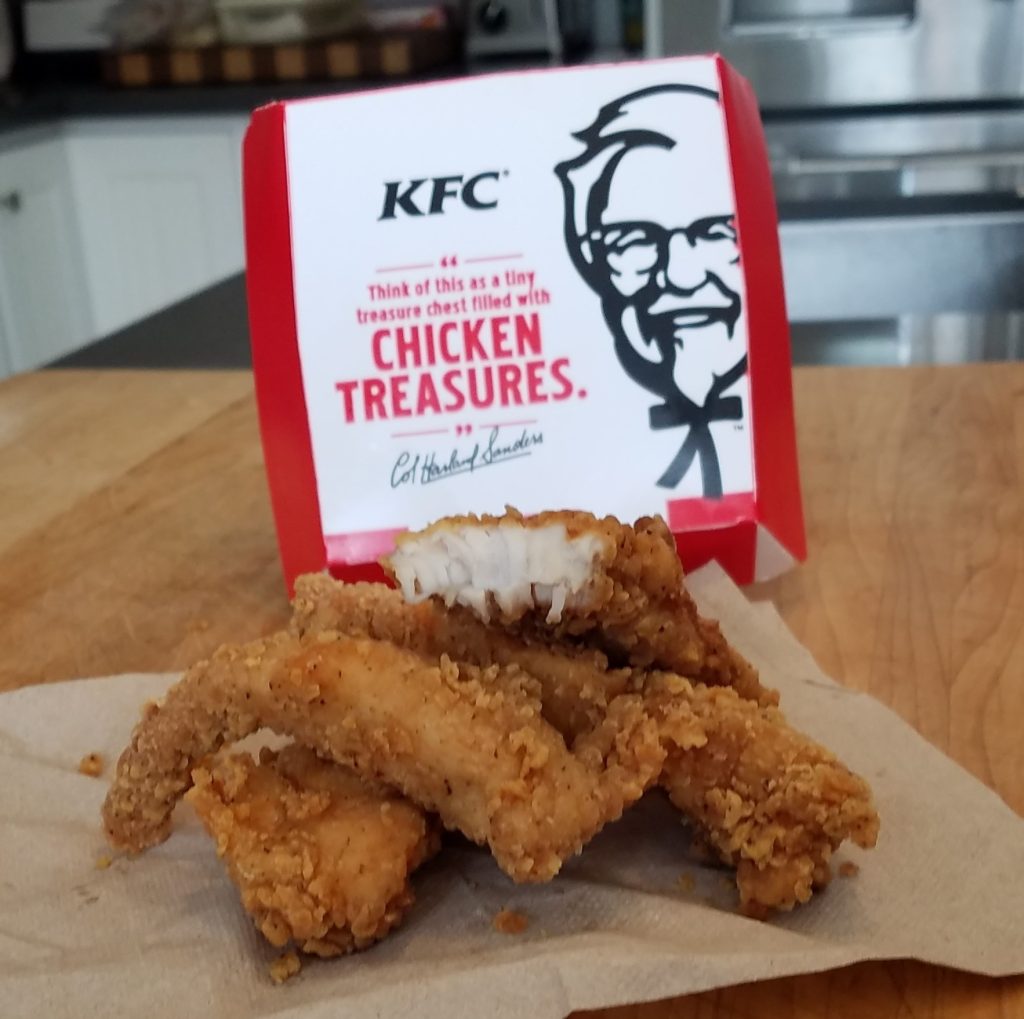 They had a nice texture and a good mouth feel but the tasting panel felt that if the strips had been breaded and fried in the same style as the filet I’m sure they would’ve scored better. In this case they were amazingly in third place.

We tried these tenders when we sampled CJ’s chicken sandwich and were quite impressed with the tenders but not so much with the sandwich and noted then that it seemed kind of odd that you wouldn’t treat your chicken tender and your sandwich in the same fashion. They have a nice brown fry color and are perfectly seasoned and with a better crunchy texture then the KFC. Nice piece of chicken, firm and tasty – a strong second place. 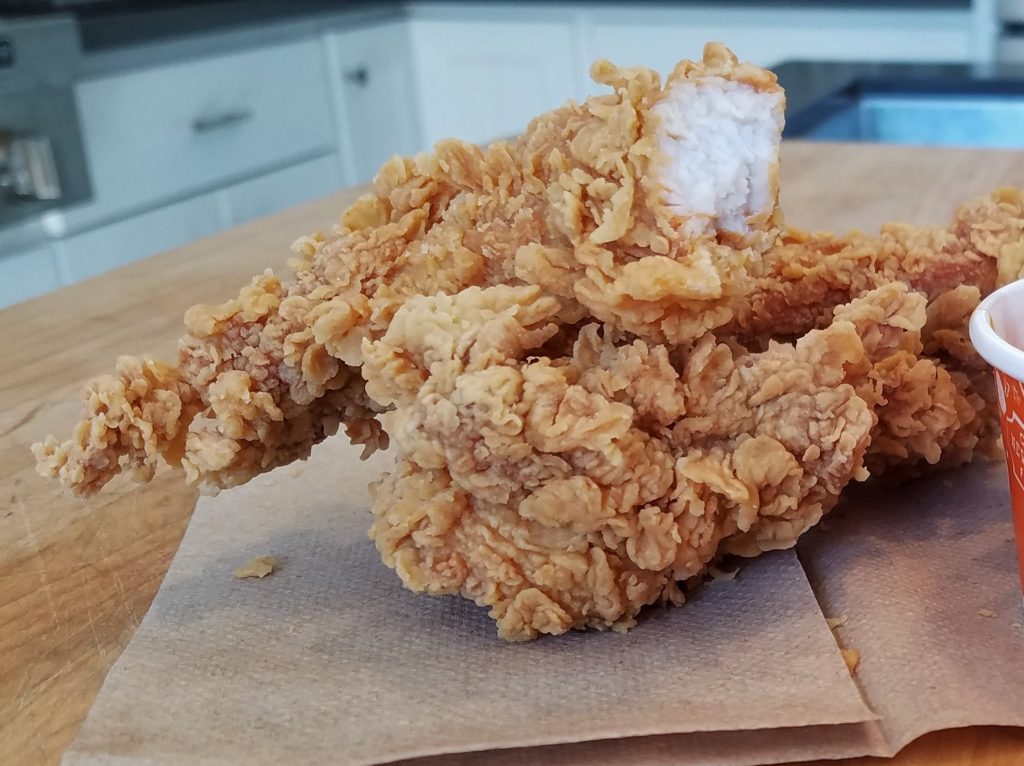 Nice mix of juicy chicken, crunchy batter and great flavor, it’s a really tasty bite of chicken and frankly brings back memories of their quite tasty chicken breast sandwich which is exactly the point I’ve been trying to make; they should be the same flavor profile and that’s why they’re number one.

The real winner of the day though was a new and improved version of Popeyes mac & cheese. The tasting panel noted that it had a nice balance of flavor and richness and even had a toasted cheese topping. It was added to the lineup in hopes of making the menu somewhat more kid friendly as Popeyes admittedly is aimed at an adult audience.

For an unbelievable report on Popeyes mac & cheese please read the following:

Amy Alarcon, vice president of culinary innovation at Popeyes, in an podcast interview with Nation’s Restaurant News, noted the amount of butter, cheese and milk that went into the product but she said that the most important taste factor was that the product is actually baked-off which gives all the ingredients a totally different flavor profile and also gives you the browned top – just like mom used to make. 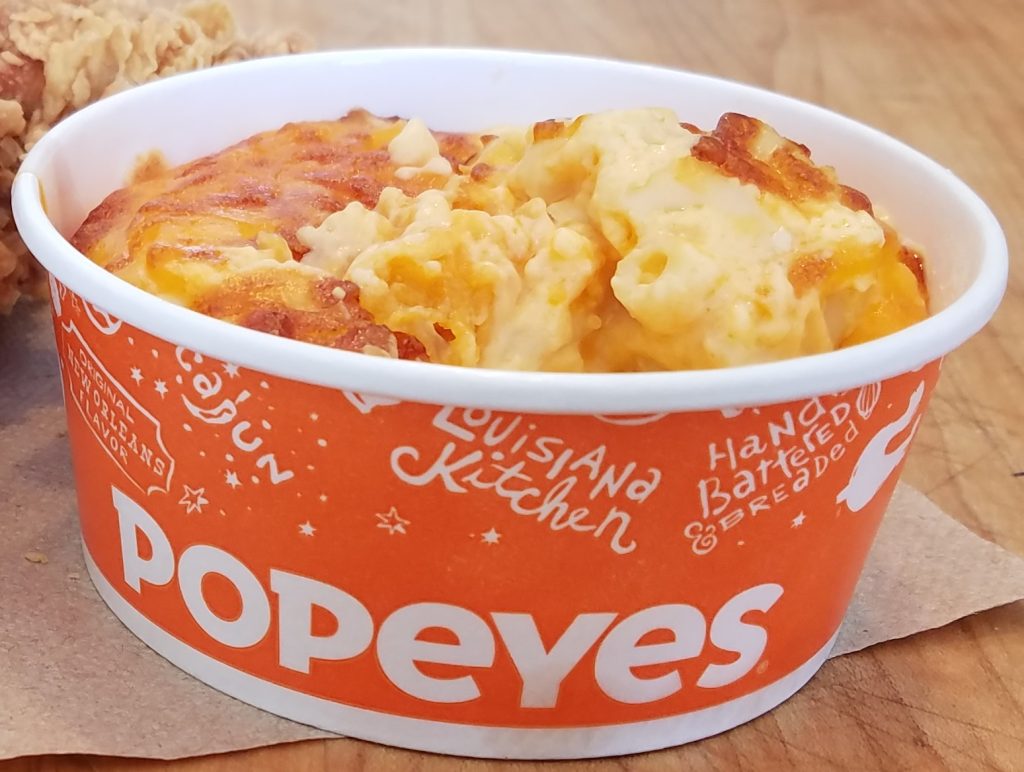 But here’s the real kicker, I was totally shocked that the NRN “editors” in a discussion regards declining sales at Popeyes prior to Alarcon’s interview all affirmed that – are you ready for this – they had never tasted a Popeyes chicken sandwich – wonder how I get a job like that.

It gets worse though, during the interview with Alarcon she asked one of the young gentlemen editors what he had for lunch that day, well that’s easy you say he had a Popeyes chicken sandwich – nope he tells her, “I had a pita bread and hummus sandwich” – he really said that to her.

I don’t know how you become an “editor” at a national magazine without doing any research on your subject, it just flabbergasts me. How do you get away with not knowing what the food tastes like that when you’re asking someone about their company’s menu, what’s your follow-up question? – “Will you be deep frying pitas?” A pita and hummus sandwich, really?

I even posted in their comments section that it was embarrassing to read that these people hadn’t tried the product or that the guy hadn’t tried the mac and cheese before the interview with Ms. Alarcon, who by the way was very gracious to not laugh out loud or make a rude remark to the gentleman’s response. 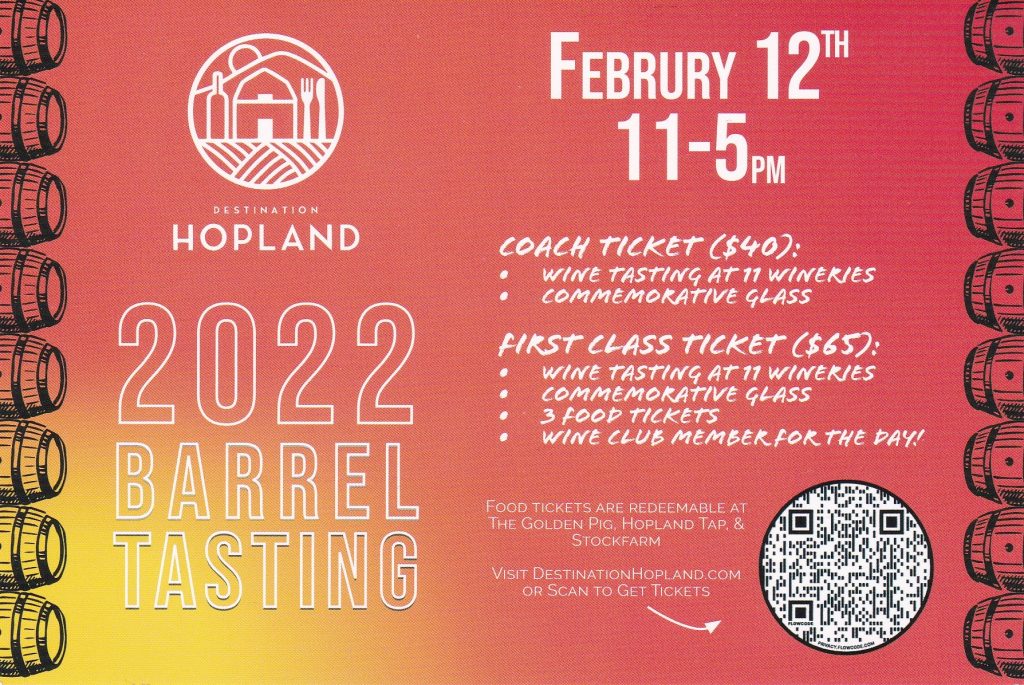 We thiefed wine from barrels at eight wineries on the Saturday of Valentines weekend as we took a short hours drive ‘s north of Santa Rosa up into Mendocino County and the lovely little town of Hopland. Oh the first person who emails me with the error on the card above gets a free subscription; The Hopland folks claim the designer is a millennial.

Thieving wine is a technique used by winemakers to take samples from a barrel to see how the wine is progressing in its aging process so it’s quite a treat to be allowed to sample from these barrels in the same fashion and to learn what the future holds. 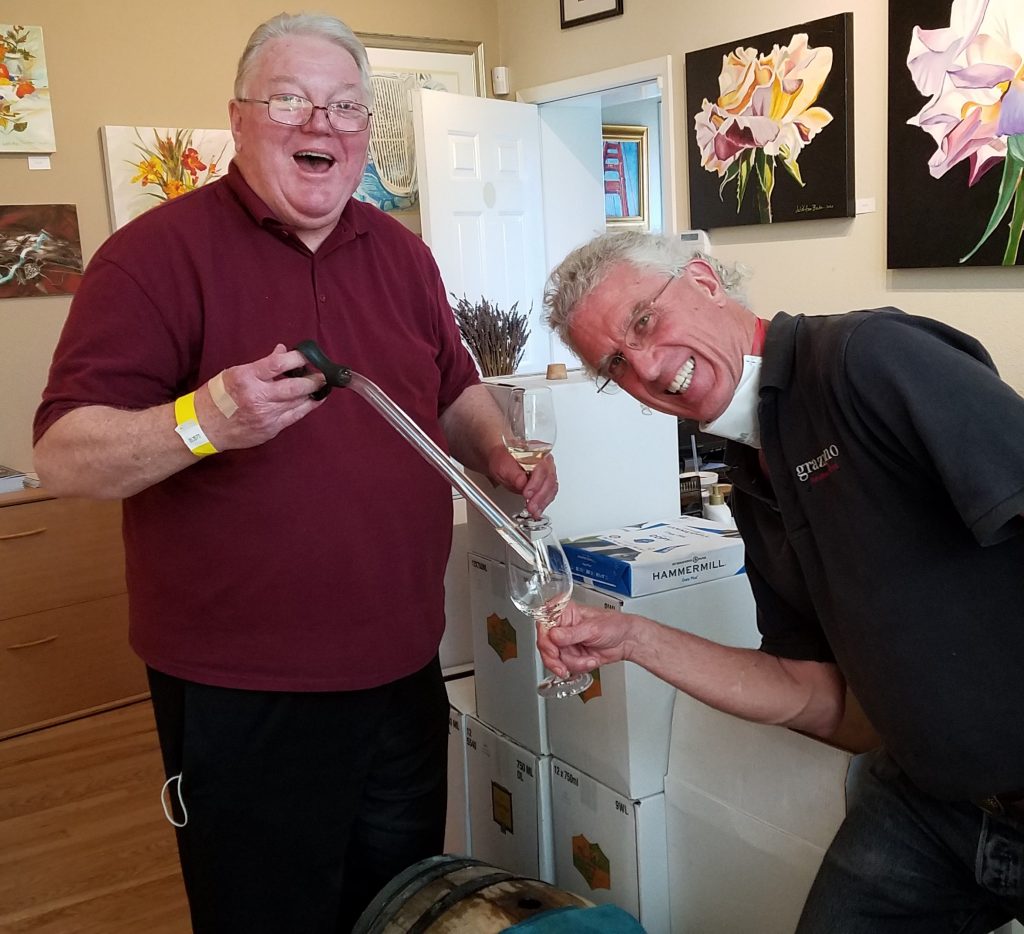 As you can see I had a pretty good time at the Graziano winery after receiving instructions from the tasting room manager John. We also enjoyed a Syrah at the Nelson family winery, Saracina, Brutocao, and Stockfarm Restaurant where I enjoyed the tastiest Italian meatball calzone I’ve tasted since we moved here, quite a sunny and enjoyable day. 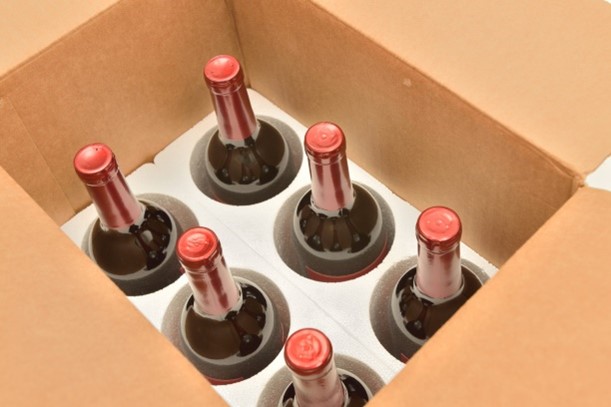 A new first Q1 report from Rabobank reveals that the spirits category is succeeding in connecting with consumers that the wine industry is struggling to engage with. It further shows that in 2021, shipments of spirits grew twice as much as wine shipments.

The report, which provides insight for 2022 and beyond, attributed the market gains by the spirits category as being down to a number of factors, including: increased TV advertising spend; ‘favorable cultural references’ such as spirits being mentioned in binge worthy TV shows; and the well-documented rise of home cocktail making.

However, while it might sound like spirits are getting all the action, it was a different story online, with wine triumphing in the world of e-commerce in the US.

According to the report, e-commerce represents the wine category’s “most powerful advantage” over beer and spirits, and could be a much-needed “way in” with younger consumers.

In short, wine dominates online, with 62% of total alcohol sales. But wineries should perhaps not get too comfortable, as signs show its digital advantage may be stalling. In 2020, the wine category’s share of off-trade sales in the e-commerce sphere was 62.4%. In 2021, it was 62.2%, showing a slight drop.

The Illinois wine industry, a growing network of boutique wineries and vineyards dotting the state, is looking for a little more shelf space at your local retailer.

Struggling during the pandemic with a business model built mostly on tours, tastings and in-person sales, Illinois wine producers are pushing for legislation to increase self-distribution to stores and restaurants, bypassing a Prohibition-era state law requiring a middleman (distributor) in such transactions.

Lynfred Winery in the Chicago suburb of Roselle is a 43-year-old basement hobby that has grown into one of the state’s oldest and largest family-owned wine producers saw sales decline sharply as visits by its 6,000 wine club members were curtailed by the pandemic.

I must step in here and wonder aloud why Lynfred and any other winery in Illinois didn’t immediately turn to the direct-to-consumer (DTC) format as did most every other winery in the country setting sales records with the help of UPS.

A little back story is also necessary; I met the late Fred Koehler back in 1994 when yours truly was appointed to the newly formed Illinois Grape & Wine Resources Council as its Marketing Advisor, a non-paying position, by then State Senator Dave Luechtefeld. And here are some more Illinois names for you; Governor George Ryan and Treasurer Judy Baar Topinka. Ryan had helped created the council with $50,000 in funding to aid downstate economic growth and Treasurer Topinka created a loan fund to help start-up wineries plant grapes which take four years to produce a harvest worthy crop. 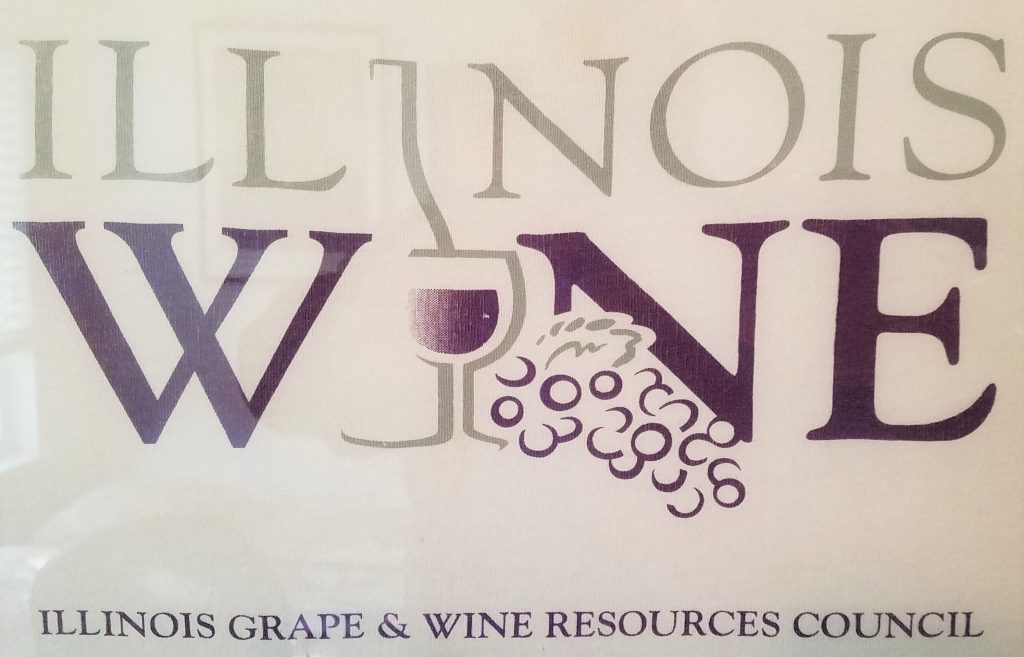 Fred was the big player in the group and always wanted to get his bottles into stores without having to go through the cost of the three tier system. He had already been successful in placing a couple of his wines in Chicago restaurants that he reminded us of on a regular basis, but as I would advise the other very small start-up wineries that their best bet was to “sell it out the front door,” avoiding the cost of distribution.

I spent six interesting years with the council while in my day job, serving as the marketing director for the Regional Transportation Authority in Chicago. The council and its very successful work; 8 wineries when we started to nearly 100 when we were terminated by another well-known Illinois name, indicted former Governor Rod Blagojevich who gave the council’s money to some of his buddies.

The Illinois industry is more robust than many people realize, with 139 wineries, 53 vineyards and two homegrown vinicultural areas: Shawnee Hills in the southernmost part of the state and the Upper Midwest Valley in northwest Illinois.

“Our biggest issue is limits on self-distribution and production,” said Lisa Ellis, executive director of the nonprofit Illinois Grape Growers and Vintners Alliance. “We’re for the most part small boutique winery operations who do not produce millions of gallons a year…” The Springfield-based alliance is backing a proposed amendment to the state’s Liquor Control Act of 1934 that would substantially increase the amount that wineries could self-distribute to restaurants, retailers and other customers without the required middleman.

When the Illinois Grape Growers and Vintners Alliance formed in 1992, there were only seven wineries across the state, Ellis said. Since then, Illinois has grown into the 18th largest wine-producing state in the U.S. with nearly 1.2 million gallons vinified in 2019, according to an economic impact study commissioned by the alliance.

The Illinois wine industry generated $5.7 billion in annual economic impact and created more than 36,000 jobs, according to the study, which was conducted by liquor industry economist John Dunham.

California Crushed 3.6 Million Tons of Wine Grapes in 2021 and the Price of those tons of red grapes rose 32% while white wine grapes were up 19.7%

In its preliminary crush report released in February, the California Agricultural Statistics Service says 3.6 million tons of wine grapes were crushed in 2021, up nearly 6 percent compared to 2020.

My recipes for Mac & Cheese and Bow-Tie Pasta with Ham and Peas are just a click away, enjoy!